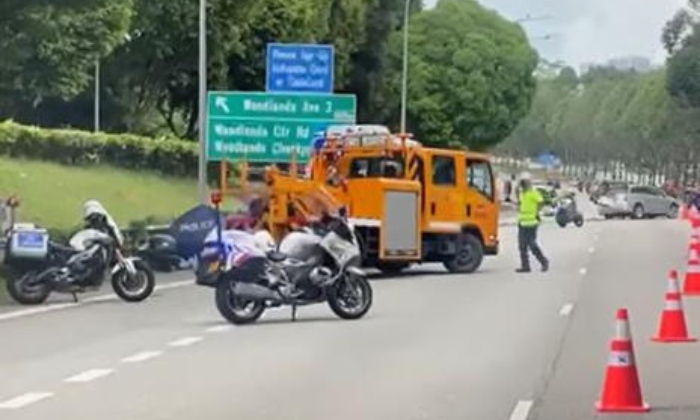 A 70-year-old died after his motorcycle was involved in an accident with a car on the Bukit Timah Expressway (BKE) towards Woodlands on Saturday afternoon.

A 35-year-old female driver and her six passengers, all conscious and aged one to 25, were taken to Khoo Teck Puat Hospital, said the police and the Singapore Civil Defence Force on Sunday.

The motorcyclist was pronounced dead at the scene by an SCDF paramedic.

The driver was subsequently arrested for careless driving causing death.

Investigations are ongoing, said the police, who were alerted to the accident at about 2.55pm on Saturday.

This is the second reported accident on that day around the BKE area.

Another motorcycle and car were involved in an accident on a Seletar Expressway slip road leading to the BKE.

The motorcyclist, a 51-year-old bus driver with SBS Transit, was conscious when taken to Khoo Teck Puat Hospital. The police were alerted to that accident at 3.35pm.