Motorcyclist, 69, taken to hospital after trying to avoid lorry at Upper Serangoon Road 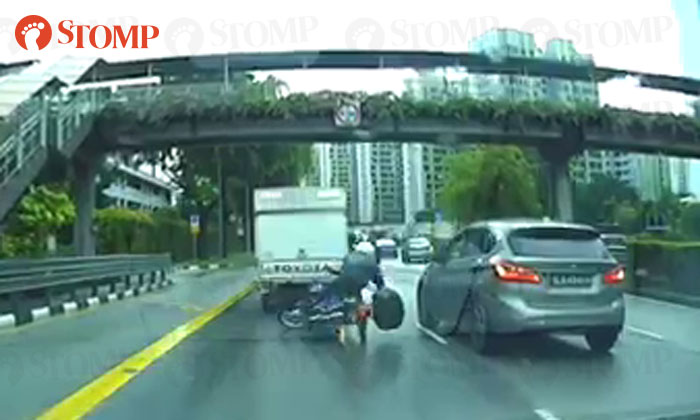 A 69-year-old motorcyclist was taken to hospital after falling off the bike he was riding along Upper Serangoon Road towards Sengkang East Drive on Monday afternoon (July 27).

The police told Stomp they were alerted to the accident at about 4.03pm.

Stomper Don shared with Stomp footage taken from his in-car camera showing what had happened.

"The accident happened near the bus stop in front of Block 102 Potong Pasir Avenue 1," he said.

"This silver Hyundai car SKT1222J cut in front of the motorcyclist causing him to turn his head to look at the Hyundai driver.

"He reacted too slow to realise the lorry in front of him had come to a stop.

"He tried to serve to the right but lost balance and fell to the ground.

"That Hyundai driver didn't even bother to stop his car to help out and just drove off."

In response to a Stomp query, a police spokesman said the 69-year-old male motorcyclist was conscious when taken to Tan Tock Seng Hospital.