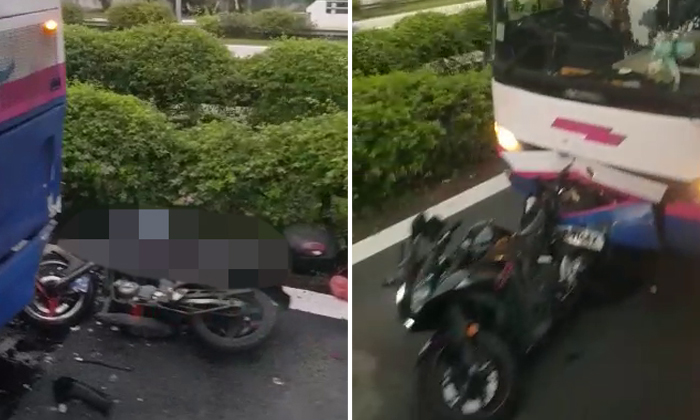 A 59-year-old man died in a traffic accident involving a bus and two motorcycles along Ayer Rajah Expressway (AYE) on Wednesday morning (June 19).

The police told Stomp that a bus driver and a motorcyclist have been arrested in relation to the case.

Stomper Aloha alerted Stomp to the accident and shared a photo of a blue death tent by the side of the expressway when he passed by the scene this morning.

Several other Stompers alerted Stomp via WhatsApp to a video that has been circulating on Facebook.

The video shows a body at the scene of the accident.

Due to its graphic nature, Stomp will not be publishing the video.

The Singapore Civil Defence Force (SCDF) said in a statement to Stomp: "SCDF responded to an accident on AYE towards the Marina Coastal Expressway before Jurong Pier exit at about 7.15am.

In response to Stomp queries, the police said: "One of the motorcyclists, a 59-year-old man, was pronounced dead by paramedics at the scene.

"The bus driver, a 52-year-old man, was arrested for causing death by negligent act.

"The other motorcyclist, a 20-year-old man, was conscious when conveyed to Ng Teng Fong General Hospital where he was subsequently arrested in relation to the case.