Motorcyclist, 45, killed in accident involving 2 cars and trailer along SLE 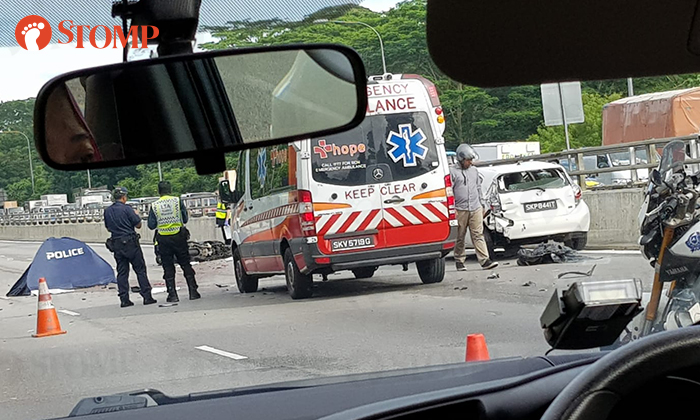 A 45-year-old motorcyclist was killed after an accident involving two cars and a trailer along Seletar Expressway (SLE) on Monday morning (Dec 16).

In a circulated video contributed by Stomper Kelvin, it can be seen that two lanes along the SLE have been blocked and vehicles are only able to travel along one lane. 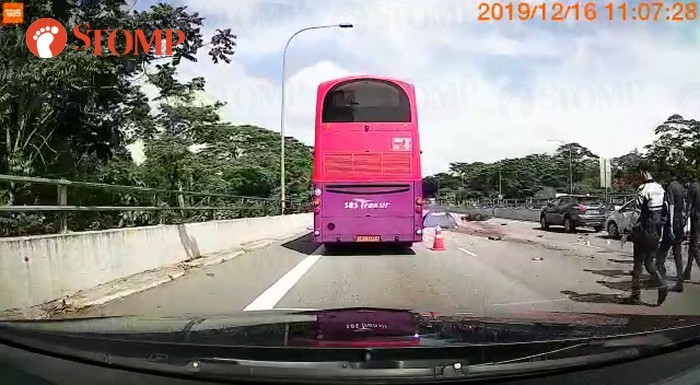 Several people can be seen walking in the accident site and a blue tent is spotted near the end.

A motorcycle is also seen lying on the road.

Stomper Pink contributed photos of the aftermath of the accident.

She told Stomp: "I was in a Grab and going to work at the time when I saw the aftermath of this accident.

"The blue tent was already there when I went past the area.

"Traffic was rather bad. I was stuck in a jam for about half an hour as two lanes were blocked."

The Land Transport Authority said in a tweet at 8.55am on Monday (Dec 16):

Accident on SLE (towards BKE) after Upper Thomson Rd Exit. Avoid lanes 1 and 2

Several other Stompers also contributed circulated videos of the accident that were published on Facebook page SG Road Vigilante.

Stomp will not be publishing these videos due to their graphic nature.

In response to a Stomp query, the police said: "At 8.45am on Dec 16, the police were alerted to an accident involving two cars, a motorcycle and a trailer along SLE towards Bukit Timah Expressway.

"The motorcyclist, a 45-year-old man, was pronounced dead at the scene by paramedics.

"The police are aware of videos circulating online of the accident.

"We urge the public not to circulate these videos."