Motorcyclist, 37, killed in accident with trailer at Jurong West 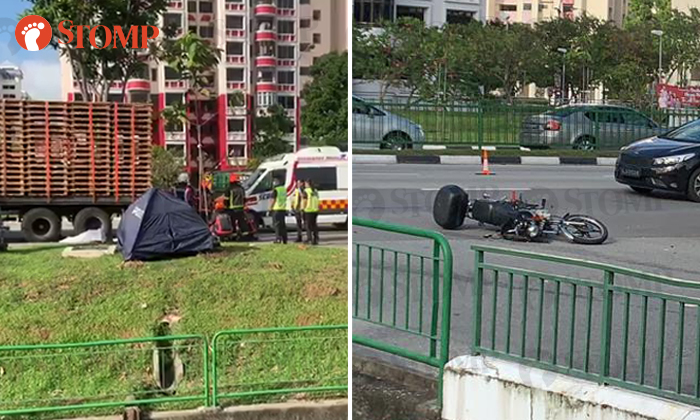 A 37-year-old man died in an accident involving his motorcycle and a trailer in Jurong West on Monday morning (Dec 30).

In response to a Stomp query, the police said they were alerted to the accident along Jalan Boon Lay, towards Jurong Pier Road, at 8.49am.

The motorcyclist was pronounced dead at scene by a paramedic, the police and Singapore Civil Defence Force (SCDF) told Stomp.

Stompers Faiz and Anonymous contributed photos and videos taken at the scene.

In the photos and videos, SCDF officers can be seen trying to extricate the victim's body from underneath the trailer.

A motorcycle is seen lying nearby on the road.

Videos also show a police tent subsequently being set up at the scene.

Faiz told Stomp: "Police evacuated onlookers from the scene, and cordoned off the area around Shell petrol station and River Valley High School.

"Two lanes of the road were closed to facilitate the extrication.

"There was heavy traffic all the way back to Jalan Bahar and Shell staff helped to redirect traffic."