Motorcyclist, 26, dies after accident with pedestrian, 16, at Hougang Avenue 9 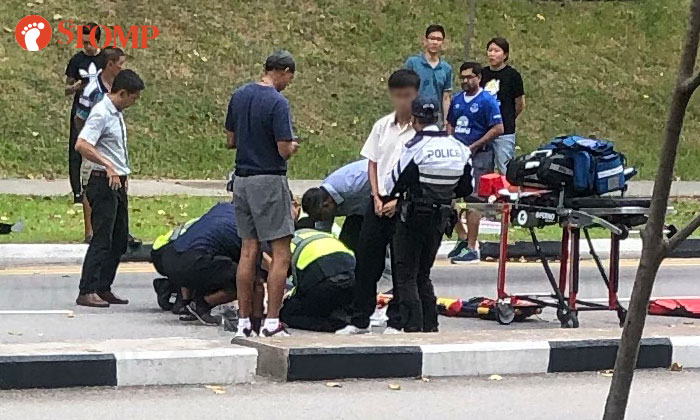 A 26-year-old motorcyclist died after he was involved in an accident with a pedestrian along Hougang Avenue 9 on Monday afternoon (Apr 22).

The pedestrian, a 16-year-old boy, was conscious when he was taken to Tan Tock Seng Hospital, the police told Stomp.

Stomper Ril.X alerted Stomp to the accident that happened near Ci Yuan Community Club and shared photos he took at the scene.

Ril.X said the boy was wearing a secondary school uniform.

"I believe the rider lost control," the Stomper said.

A video posted on All Singapore Stuff shows passers-by tending to the rider and pedestrian after the collision.

Accident at my working place around 12:50 am. While I'm going for my lunch, I saw this accident involved a student and a...

Posted by All Singapore Stuff on Monday, 22 April 2019

In response to a Stomp media query, a police spokesman said they were alerted to the accident along Hougang Avenue 9 towards Yio Chu Kang Road at about 1pm.

The motorcyclist, a 26-year-old man was conscious when taken to Tan Tock Seng Hospital, where he subsequently succumbed to his injuries, a spokesman said.