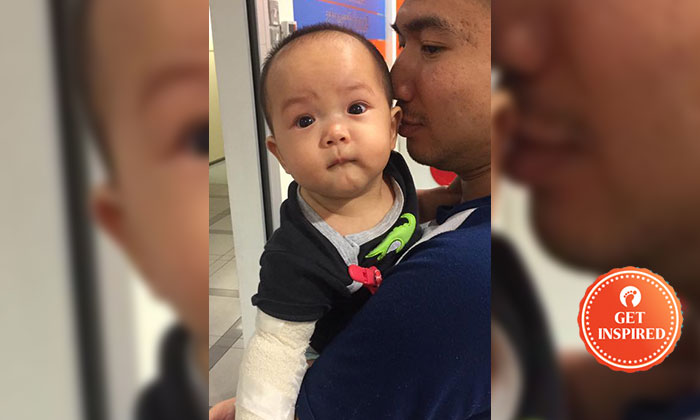 An attempt to amuse a toddler turn awry when a maid shook a thermal flask which was not properly closed, spilling boiling water on the seven-month-old infant and scalding her.

The mother of the child, Facebook user, Jinghan Naan, was initially enraged but after a talk with her husband, decided to forgive the maid.

In the post, Jinghan said that her baby, Masha, was scaled with boiling water on her right arm on Dec 8, after her new helper shook the flask to amuse the infant.

The helper did not realise that the flask wasn’t closed properly, spilling the water on Masha.

“Blisters were already starting to form on her pink skin.”

The maid attempted to console Masha but was too afraid to make direct contact with her.

Jinghan also noted that the maid had apologised to ‘every single person in the house’ before the couple left with their baby for a hospital to seek treatment.

During the drive to the hospital, Jinghan was filled with scorn and distaste for the maid who had hurt her child.

She was further irritated by the cheerful demeanour adopted by her husband to distract Masha from the pain.

Aizat, however, noticed her silence and said:

“It was an accident boop.”

Jinghan’s heart was further shattered by Masha’s cries of anguish as hospital staff dressed her wounds, fuelling her rage.

“My baby was suffering unnecessarily because of the helper's carelessness.”

After the ordeal, Aizat looked at her and said:

He was interrupted by Jinghan who snapped:

To the dumbfounded Jinghan, he continued:

“The water probably spilled on her as well. We didn't even bother to ask if she was ok.”

“But this is her fault!”

To which Aizat answered:

Jinghan pondered over her actions and realised that while she had always thought of herself as more patient and compassionate than her husband, she behaved poorly under testing circumstances.

Aizat, on the other hand, becomes an entirely different person, said Jinghan.

“It’s as if the worst of times would always bring out the best in him.”

Overall. Jinghan learnt that her assumption — that she had the right to ‘misbehave’ in trying times just because of her good behaviour in normal times — is misplaced.

“This has served as a huge lesson for me. I hope that by sharing this, we can all practice more magnanimity, patience and compassion in the most trying of times.”

Related Stories
Foreigners come together to help man in wheelchair alight at AMK bus stop
Stroke patient struggles with cancer for 13 years, makes a living by fixing appliances
How Project CARE seeks to create a nation of independent elderly through empowerment
More About:
inspiring
maid
infant