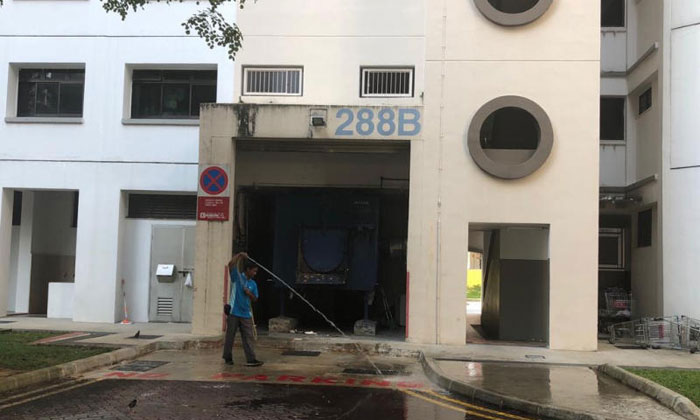 A woman and her five-year-old daughter were found dead at the foot of a block in Toh Guan estate in Jurong East on Wednesday.

Ms Siivashinni Johanan, 29, a private nurse, and her daughter Chiryllanyaa Ganesan, who had multiple injuries, were believed to have fallen from a height at Block 288B Jurong East Street 21.

A police spokesman said they were alerted to the case at 9.51pm and the victims were pronounced dead at the scene.

The cases have been classified as unnatural deaths and police investigations are ongoing.

A resident who wanted to be known only as Madam Wong, 65, said her son had called the police.

The cleaner, who lives on the 13th storey of the block, added in Mandarin: "My son and other relatives had visited me for Chinese New Year and were about to leave after dinner.

"When my son went down to get his car, he saw the woman and girl lying on the ground at the refuse area and went over to try to help them.

"But he realised he couldn't do anything and quickly called the police."

A housewife living on the second storey who gave her name only as Madam Grace, 53, said: "I heard a loud thud followed by an even louder sound a few seconds later at around 9.30pm.

"I thought they might have been firecrackers because it was the second day of Chinese New Year."

She said she saw a man, believed to be Ms Siivashinni's brother, looking distressed when he identified the bodies at around midnight.

Ms Siivashinni's relatives told The New Paper yesterday that she did not live in Jurong East but was at her brother's flat nearby that evening. TNP understands her address was in Compassvale in Sengkang.

Her cousin, Mr Steven Chan, 43, said that while Ms Siivashinni was in her brother's flat at about 9pm, she wanted to go to the nearby shops.

"Her daughter wanted to accompany her and they left together," the operations executive added.

He said that Ms Siivashinni, a single parent, had just returned from Switzerland on Sunday.

"When her parents died a while ago, it took a heavy toll on her. She had been battling depression for a long time," he said.

"We convinced her to go to Switzerland for three months to clear her mind because her sister works there as a teacher."

Mr Chan said the family is still in shock and devastated by the tragedy.

"Siivashinni had all the attributes of a nurse. She was kind, understanding and loving, and her daughter was bubbly and cute. The entire family loves them so much."

Ms Frances Yeo, a consultant psychologist at Thomson Medical Centre, said it is important for family and friends to talk to those with depression about the issue.

She said that people are often scared to ask loved ones with depression if they had thought about killing themselves, when it is actually important to discuss the issue.

"The misconception is that talking about it will make them do it. But if we avoid it, it's like dismissing the problem, which ends up not being addressed," she said.

As not talking about it makes those with depression feel even more isolated, she urged their loved ones: "Talk to them, empathise with them, and encourage them to seek professional help."

She added: "Family and friends can also call the helplines, or take them to the Institute of Mental Health or any hospital if they show signs of wanting to hurt themselves."

There have been similar cases of unnatural double deaths involving a parent and child.

Tragedies in recent years include one in Pasir Ris involving a father and daughter in 2017 and another in Bukit Panjang involving a mother and baby in 2016.

Mr Chan said that while he cannot change what happened to his cousin, he hopes others with depression can get help.

"To all those struggling with depression, please know that it's not impossible to be cured," he said.

"Seek help, talk to your friends and family, and always love your life, because there will always be people around who love you very much."

The wake of Ms Siivashinni and Chiryllanyaa is being held in the multi-purpose area at Block 271A Toh Guan Road.

They will be cremated on Saturday afternoon at Mandai Crematorium.

Ms Frances Yeo, a consultant psychologist at Thomson Medical Centre, said family and friends can play a crucial role in helping those with depression.

She said they should look out for key indicators of depression and take preventive measures or action if the person shows signs of being suicidal.