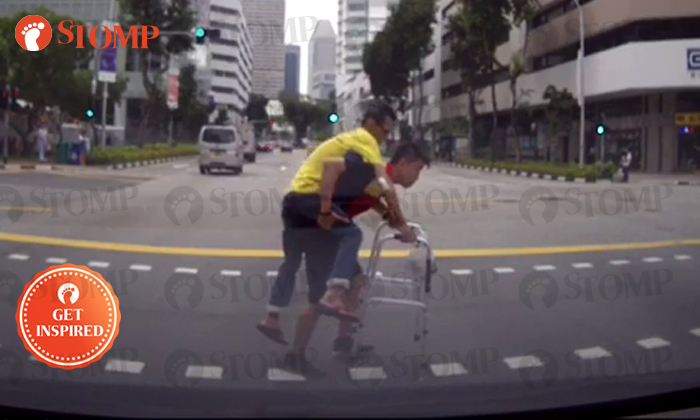 The DHL Express courier who piggybacked an elderly man across the road was not aware that his actions were being captured on camera -- or that the video would go viral.

Read the full update here: DHL courier who piggybacked elderly man across road: "I'm only doing what is right"

Seeing that an elderly man was having difficulty crossing the road, a driver from shipping giant DHL Express Singapore exited from his van and went forward to help.

However, the elderly man continued to struggle with his walking aid -- prompting the DHL driver to piggyback him across the road.

The heartwarming incident occurred at the junction of Waterloo Street and Middle Road at around 10.45am on Friday (May 17), and was caught on camera by Stomper H. Leonardi.

H. Leonardi, who shared the video with Stomp, said: "There was heavy traffic and the traffic light had turned green for vehicles. But the car beside me suddenly stopped, which made me wonder why.

"That's when I saw the elderly man having difficulty crossing the road due to mobility issues.

"The DHL driver stopped his vehicle at one side, crossed over from the opposite side and came to provide assistance."

The Stomper, who said this is the first time he has witnessed something like this, added: "In my books, the DHL driver is a hero who went above and beyond to help the elderly man.

"I was really touched by his kindness and and felt that faith in humanity has been restored."

In response to a Stomp query, Mr Christopher Ong, managing director of DHL Express Singapore, said: "We are proud to have Anson Chung, who has such a big heart, as a member of our staff.

"We are glad that he was there at the right time and place to lend a helping hand.

"He is a role model to all our employees of how we can be connecting people and improving lives beyond just delivering parcels.”