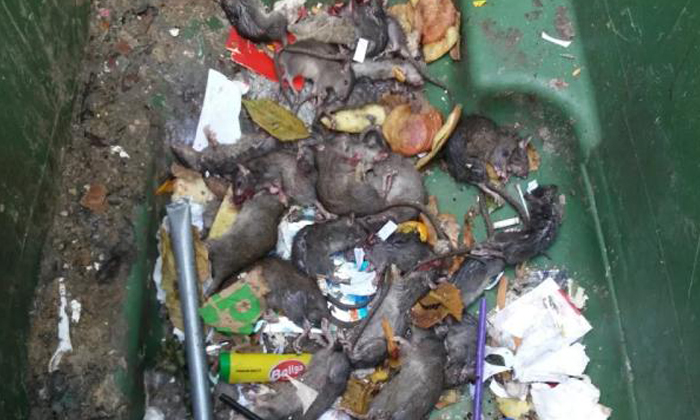 In a viral video that has more than 70,000 views online, the rats were filmed scurrying about in the rubbish bin, trying to escape.

A resident told Shin Min the rats have been around for at least six years.

Other residents on the ground level said the pests had also entered their flats.

They told the Chinese daily the authorities would get rid of the rodents and the problem would improve temporarily before the pests returned.

Last Thursday, a spokesman for the Pasir Ris Town Council told The New Paper they were aware of the issue.

She said pest control checks and treatment at the location was carried out last month.

She said: "Rats' baits were also placed at the vicinity as an additional measure to control the rat activity.

"In response to the feedback received, the town council will work closely with our pest control contractor to carry out rat culling and the various stakeholders to cut off access to food sources for rats."

A student, 20, who has lived all his life in the block, told Shin Min that the rodent problem has worsened with the pests appearing almost every night.

He said: "There was one time, my family and I witnessed four fat rats in front of us. We are all scared, and to avoid the rats, we have resorted to taking a longer route home."

She said: "Therefore, we strongly urge residents to refrain from leaving food unattended and practice proper refuse disposal to tackle the problem holistically. The town council is also exploring using technology to monitor the rat population in some areas on a trial basis to assess its effectiveness."