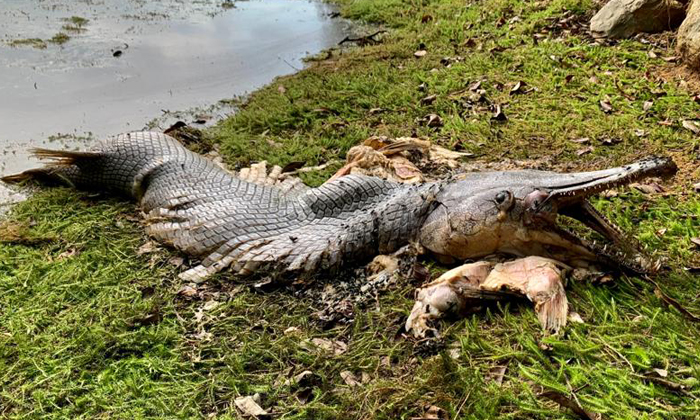 The carcass of a 'monstrous' fish spotted on Sunday (Feb 14) at MacRitchie Reservoir is the latest sighting of an alien species that is not supposed to be here at all.

It was identified as an alligator gar. The fish, native to North America, can grow to a length of 2.5m, and is known to be released by owners who cannot cope with its size.

Over the past 10 years, more than 20 people have faced enforcement action for illegally releasing animals, national water agency PUB and the National Parks Board (NParks) said in a joint statement on Wednesday.

The carcass of the fish was removed by PUB on Monday.

When such non-native animal populations grow, they compete for natural resources with native biodiversity, the statement said.

In January 2019, around 140 motoro stingrays, which are non-native, were removed from Lower Peirce Reservoir.

According to Dr Tan Heok Hui, an ichthyologist - or marine biologist who studies fish - at the Lee Kong Chian Natural History Museum, there has been only one capture of an alligator gar in Singapore but it is "rather common" in local fish shops, where juveniles - averaging around 20cm - are sold.

"Its flesh is harvested for food in Mexico, although its eggs are toxic," he added.

Bedok Reservoir, Marina Reservoir and Bishan-Ang Mo Kio Park are among the places where the fish has been seen over the past two decades.

While the latest sighting fascinated geologist Karen Lythgoe, who shared it on Nature Society (Singapore)'s Facebook group after chancing across the carcass on Sunday, she was dismayed to discover its origins.

"I was really shocked when I found out that the fish was released in the wild, that's just irresponsible," said Dr Lythgoe.

Under the Public Utilities Regulations, those who release animals into reservoirs and water ways may be fined up to $3,000.

Offenders caught releasing animals in parks and nature reserves face fines of up to $50,000, while those who release wildlife can be fined a maximum of $5,000.