Monkeys create nuisance at condo balcony in Keppel Bay: "My kids had nightmares" 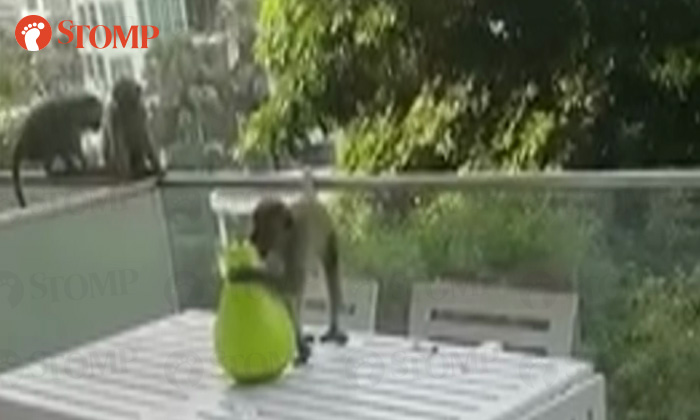 Stomper K, a resident of a condominium in Keppel Bay, first sighted monkeys on her balcony on May 23 and said that she has seen them on more than five occasions since then.

K said on a particular Sunday (Jun 3), the monkeys even visited three times.

K said: "That day I saw them in the morning before going out. Then when I came back, I saw the monkeys two more times again."

K said she alerted the police every time the monkeys appear.

"The police were nice enough to come down but said that they could not catch the monkeys because it was not their job," said K.

K said that she was advised by Agri-Food and Veterinary Authority of Singapore (AVA) and Animal Concerns Research and Education Society (Acres) to not have any food on the balcony, close all the doors, and avoid contact with the monkeys.

K said: "We observed that other than food, the monkeys are adapting to our environment."

"From my video, you can see that they are relaxing at our balcony.

"They came close to our balcony doors and were not afraid of humans.

"I also saw them attempting to open the door at the next block and the management staff also revealed that the monkeys were drinking the water at our swimming pool.

"We are traumatized with this issue.

"We are living like animals being locked up in a cage."

K said that her children have also developed a phobia towards the monkeys.

"My children screamed the first time they saw the monkeys outside," said K.

"They closed all the curtains and was scared to leave their room.

"They even had nightmares and ran into our master bedroom one night.

"It is affecting our daily lives physically and we are all mentally distressed.

"By closing all doors and windows, the apartment becomes hot and humid, and it is not like we can on the air-conditioner the whole day.

"And even if we turn the air-conditioner on, the air will not be able to circulate and will make our things mouldy from all the humidity."

K also added that the monkeys had once made a mess in her balcony.

"One of my neighbours living upstairs left a box of cigarettes and a lighter on his balcony and the monkeys were playing with it," said K.

"I was so worried that the monkeys would cause a fire but they ended up throwing the lighter to the first storey.

"But the monkeys threw the cigarette sticks all over my balcony and left behind their monkey prints as well.

"The floor and the dining table in the balcony were covered with their prints.

"We are totally drained by this matter."

Related Stories
Monkey business at Yio Chu Kang private estate after troupe breaks in to forage for food
Monkey 'stranded' for an hour at Sun Plaza after scaling wall and getting spooked by crowd
Monkey spotted on train: Relax, it's not in S'pore
More About:
animals
monkeys
wildlife