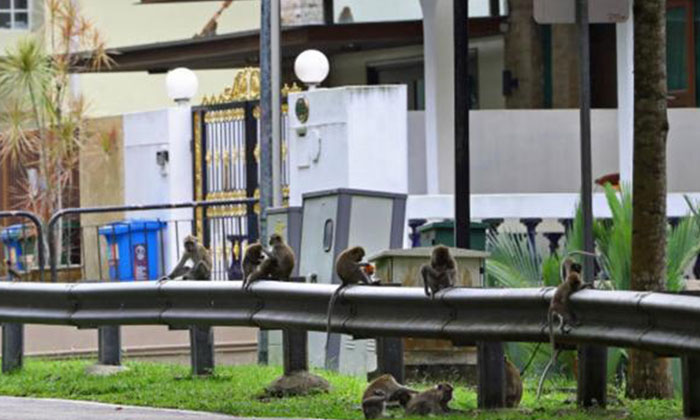 Residents at a private estate in Yio Chu Kang have been harassed by their neighbours — a troupe of 30 or so long-tailed macaques that have taken up residence in the vicinity.

The residents alleged that the monkeys had ‘moved in’ after the clearance of about 30 hectares of the Lentor (Tagore) Forest nearby.

In an earlier report by Lianhe Wanbao, a resident had been walking his dog at the Munshi Abdullah Walk when he came across the carcass of a monkey.

Lianhe Wanbao later confirmed with the Agri-Food and Veterinary Authority of Singapore (AVA) that it had engaged the services of contractors to trap the monkeys, but one of the monkeys died in the process for reasons unknown.

Reporters later visited the scene and spoke to some residents who said that sightings of the monkey have become more frequent ever since development in the area started.

According to the blueprints by the Urban Renewal Authority (URA) in 2014, a part of the Lentor Forest will be cleared to make way for private housings, as well as an MRT Station for the upcoming Thomson-East Coast Line.

Madam Zhang, 57, who have stayed in the area with her family for many years said that the ‘monkey business’ has been going on for more than a year.

She said that despite the involvement of the AVA, the problem persisted.

She said: "The monkeys have broken into my home at least thrice just this year alone.

"The most recent case was a few months back. At that time, one of them had broken in to steal some bread, and left my kitchen in a mess.”

Ms Zhang revealed that she seldom opens her windows now as she is worried that the monkeys may climb in, adding: "Sometimes, I don’t even dare to open my windows. It’s like we’re the ones living in a cage."

Another resident who has stayed here for nearly 30 years, Mr Chen, 66, said that in recent years the monkeys would sneak into his home but leave if they see anyone in the house.

He said: "Monkeys are a common sight in the neighbourhood, and once, they broke into my house to forage for food as well.

"They took some bread in the end."

However, he said that the sightings have become even more common, and residents should take measures to prevent these unwanted visitors from sneaking into their home.

He quipped: "As long as you make sure to lock your kitchen windows, the monkeys won’t be able to come in."