Monkey at Changi Airport T3: There were concerns of it venturing to runway or near planes, says Acres 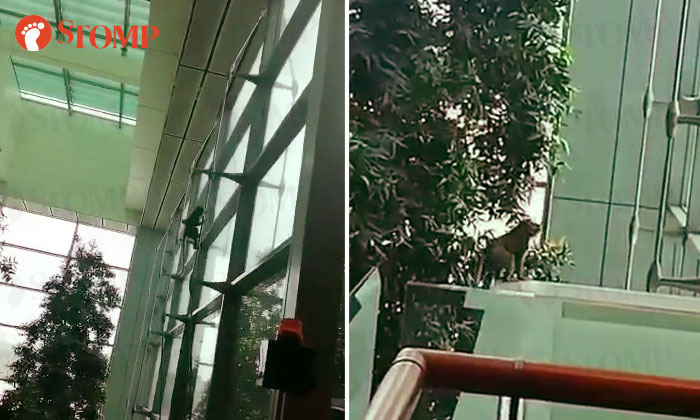 A furry traveller made an appearance at Changi Airport's Terminal 3 yesterday morning (Oct 29), much to the surprise of other visitors to the airport.

Stompers Sanchik and Timothy alerted Stomp to the incident and shared photos and videos of a macaque climbing on structures in the terminal.

Long-tailed macaques are native to Singapore.

Sanchik spotted the monkey at about 9.50am just before starting his shift as a security guard at the airport.

"The Immigration and Checkpoints Authority (ICA) staff saw the staff first and then I saw it," he said.

"Everyone started looking at the monkey which stayed near the ceiling.

"Members of the public were surprised and wanted to know how the monkey had entered the terminal."

Sanchik took videos and photos of the monkey climbing up poles before reporting it to the Changi Airport Group's (CAG) management.

A spokesman for CAG confirmed the monkey sighting with Stomp.

"A monkey was sighted this morning at Changi Airport’s T3 Departure Check-in Hall," the spokesman said.

"Changi Airport Group sought the assistance of the Animal Concerns Research and Education Society (ACRES), who managed to capture the monkey safely.

"There was no disruption to airport operations during the incident."

Deputy Chief Executive of Acres, Mr Kalai Vanan Balakrishnan told Stomp that they were notified of the adult male monkey that had apparently ventured near the departure area of Terminal 3.

"The monkey was not being aggressive to the public but there were concerns in the event the animal ventures onto the runway or near to a plane," he said.

"Given the situation, we embarked on an operation to rescue and relocate the macaque.

"As the animal was mobile, we darted the macaque from a distance.

"We worked with the Agri-Food and Veterinary Authority of Singapore (AVA) to dart the safely contain the macaque.

"We are currently assessing his health and working with Nparks to secure a release site within the next couple of days."

Stompers John, Jasmin, Dean also shared another video of the monkey that was circulating on social media where it is seen moving along a high structure.

A woman can be heard asking in the video: "Oh my goodness. How did the monkey come here?"

Mr Kalai added that it is likely more sightings of lone macaques may occur in public spaces.

"As we urbanise more and our green spaces become more fragmented, sightings of lone macaques could potentially occur more," he said.

He advises the public to keep a distance from monkeys should they encounter them.

"Do not feed them as this will result in them staying in the area," he said.