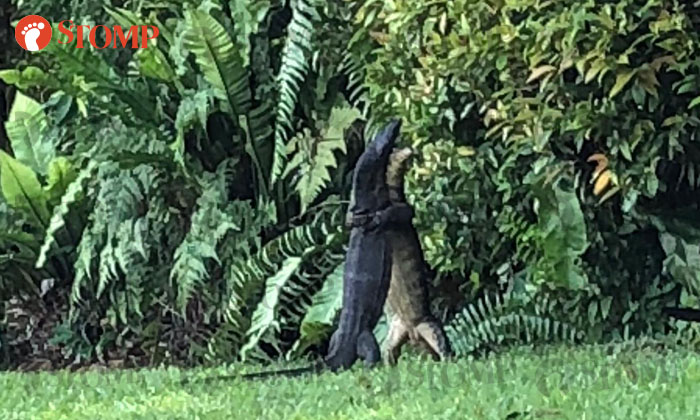 Stomper Casey took the video when he was at the course playing golf and noticed the two lizards.

Casey said: "I didn’t disturb them and watched them from some distance away to capture the phenomenal sight. It really made my day. I got a birdie at the par-three course thereafter!"

In the video, the two lizards are seen 'embracing' each other.

According to Wild Shores of Singapore's blog, the lizards are not hugging, but actually wrestling.

The video shows the lizards trying to push each other to the ground.

One of them successfully does so.

According to the National Parks Board's (NParks) website, the most common monitor lizard among the three found in Singapore is the Malayan water monitor (Varanus salvator) that can grow up to three metres long.

The other two species, the clouded monitor lizard (Varanus nebulous), and the rarest Dumeril’s monitor (Varanus dumerilii) can grow to a length of one to 1.5 metres.

Monitor lizards are mostly carnivorous and can be found in forests, mangrove swamps, and man-made canals.

Related Stories
Crocodiles fighting in water? No, it's monitor lizards "making love"
Man finds monitor lizard over 1-metre long outside his 2nd-storey unit at Whampoa South
You might miss this huge monitor lizard near Waterway Point if you aren't looking closely
More About:
monitor lizard
nature