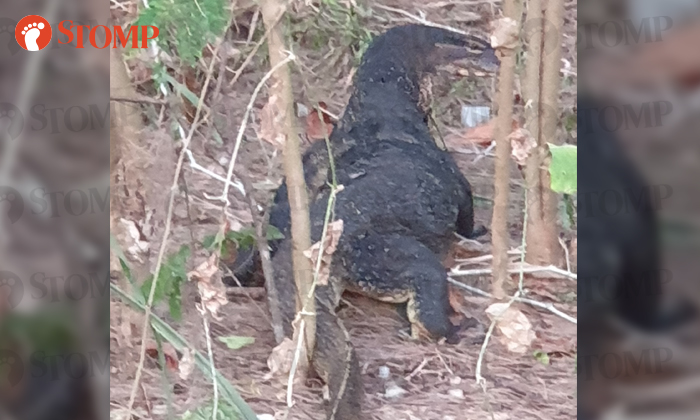 Stomper Andy's first visit to Coney Island Park proved to be a memorable one because it was also his very first time seeing a monitor lizard in Singapore.

Andy came across the reptile, which measured around two metres in length, while leaving the park at close to 7pm on Saturday (Aug 3).

Andy, who was with a friend, told Stomp: "The monitor lizard was spotted along the main trail of Coney Island, 30 metres away from the West Entrance from Punggol Promenade.

"It seemed like a master of its habitat, happily lounging across a four-metre walkway along the main Coney Island trail by Serangoon River."

Andy said he managed to snap a few photos of the animal before it went into the bushes.

"I was quite intrigued by this sighting as I thought the biggest predator at the park would be stray dogs," added the Stomper.

"The monitor lizard did not look fully grown and I hope it can be relocated as it's not safe for toddlers who visit the park."

According to the National Parks Board (NParks)'s website, here's what to do when you encounter a monitor lizard:

You may contact NParks at 1800-476-1600 or through its online feedback form for further queries.

Related Stories
Stomper sees another side of Singapore after spotting monkeys at Coney Island
Man makes astonishing discovery deep in the mangroves of Coney Island
Coney Island Park cow dies after being sedated and could not be revived
More About:
animals
Coney Island
monitor lizard