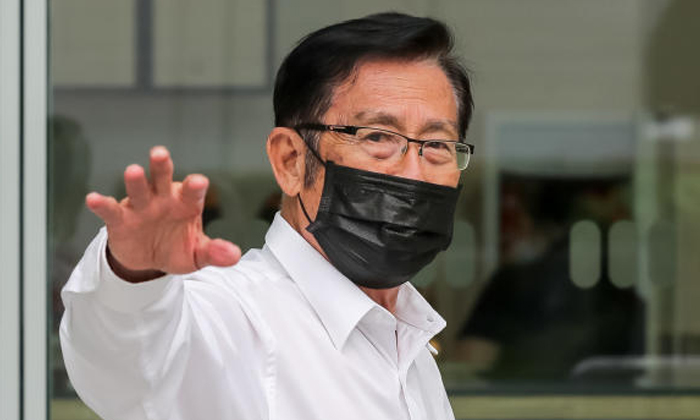 The case against veteran athletics coach Loh Siang Piow returned to the district court on Monday (Dec 20), some 18 months after he was convicted for molestation, as the court heard additional evidence from a witness who stepped forward.

77-year-old Loh, better known in the fraternity as Loh Chan Pew, was in July 2020 sentenced to 21 months' jail for molesting a female athlete twice in 2013.

In June 2020, he was found guilty of two charges of using criminal force on his victim at Tampines Stadium in order to outrage her modesty.

The victim was 18 at the time of the offences and cannot be named to protect her identity.

Charges relating to a second female athlete, who was 16 years old at the time of the alleged offences, have been stood down.

In August 2021, Loh's lawyer Tan Chee Meng presented a statutory declaration from a new witness, former athlete Amelia Monteiro, who took to the stand on Monday.

In her testimony, Ms Monteiro, 27, supported Loh's claim that police investigation officer Goh Teck Heng had told him the names of the accusers.

During the trial in 2018, the prosecution had argued that the coach not only knew the identity of his accusers before he provided statements to the police, he also revealed who they were to others in the sports fraternity to press them into dropping the case.

Loh maintained during the trial that this was not true, and claimed he had learnt who they were through Inspector Goh.

However, the officer testified that he did not tell Loh the names of the teenagers.

In a written judgment earlier this year, District Judge Marvin Bay accepted the officer's testimony that he did not reveal the names of the accusers to Loh.

Ms Monteiro said she stepped forward after reading a newspaper report on Loh's conviction which stated this.

She said she was physically beside Loh when he received a phone call - purportedly from the police - on July 31, 2016, when he was said to have learnt the identities of his accusers.

Deputy Public Prosecutor Gail Wong on Monday challenged Ms Monteiro on an inconsistency in her statutory declaration - namely the incorrect start time of her race on the day Loh received the phone call - and questioned her ability to retain information and recollection of events.

DPP Wong also asserted that there was "no reason" for Ms Monteiro to assume the person who called Loh was a male, and someone from the police, to which the witness agreed.

Ms Monteiro added, however, that Loh had uttered the names of his accusers right after the phone call ended, which made her believe he had just learnt their identities.

But DPP Wong said: "If I asked my colleague here today… 'The witness', and she replies: 'You mean Amelia?'

"Would you agree that just because she mentioned your name, does not mean I said it?"

Ms Monteiro replied: "It could be true, yes. But (Loh's) body language, and what he said (after the call), and based on his expression… he seemed to be clarifying what was said on the phone."

DPP Wong also suggested that even if Loh had stated the names of the victims after the call and said they "went to the police station", this could be for many reasons and not necessarily as accusers, which Ms Monteiro agreed with.

However, she disagreed with DPP Wong's suggestion that she was "biased" towards Loh, and had "closed (her mind) to all other possibilities about who the caller might be".

When cross-examined by Mr Tan, Ms Monteiro said she remembered the phone call in 2016 "very clearly" as she was shocked to learn the names of the accusers, as well as by how Loh reacted and what he said.

"The conversation… is (one) that replays in my head many times," she said.

Loh, a former deputy superintendent of prisons, was a former national sprinter and coach of 35 years. He was also previously vice-president of Singapore Athletics, which governs the sport here.