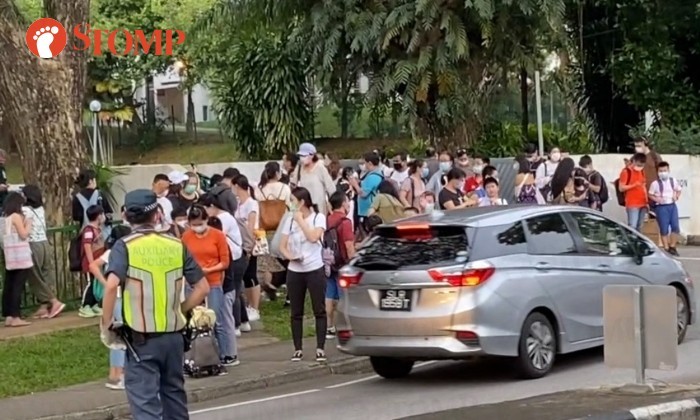 The Ministry of Education (MOE) is re-evaluating the suitability of the venue chosen for the Admissions Exercise for International Students after a man shared his concerns about the crowd seen around the area.

Stomper SK saw a crowd outside the MOE site at 53 Mount Sinai Road on 24 Sep at 11am and sent a photo and a video to Stomp.

In the video, an auxiliary police officer can be seen directing traffic as parents and children exit the venue.

"I saw a large crowd of adults and children along the road, waiting to enter the MOE site at 11am," said SK.

"There were several auxiliary police officers on-site and they were largely directing traffic.

"A couple of security guards were also at the scene and attempting to control the crowd, which just kept growing.

"When the event ended at around 6.30pm, the crowd was more dense as many people streamed out of the MOE site at the same time.

"I informed MOE about what I saw as I was concerned about the lack of safe distancing."

In response to a Stomp query, a spokesman for MOE and the Singapore Examinations and Assessment Board (SEAB) said that this event was the 2020 AEIS that was held from Sep 22 to 25 at the MOE site at Mount Sinai.

"Given the young age of the candidates, they were accompanied by one adult for registration," said the spokesman in a statement.

"Prior to the conduct of the AEIS, we had given parents and guardians various travel and health advisories, detailing the safe management measures that they had to observe.

"These measures – meant to ensure the well-being and safety of candidates as well as staff administering the tests – were strictly observed during the tests on all four days."

MOE said that parents and guardians were also told not to congregate outside the test venue and its surroundings while their child or ward was taking the tests.

MOE also mentioned that the parents and guardians could only be at the site during the registration and to pick up their child or ward in staggered timings after the test.

"In addition, we had engaged traffic controllers to manage the traffic on-site as well as security guards to control crowds," MOE added.

"From our observation, crowds had gathered only just before the start of and at the end of the test, and in both cases, they dispersed in less than 30 minutes.

"Nonetheless, we will re-evaluate the suitability of the venue to conduct this test."