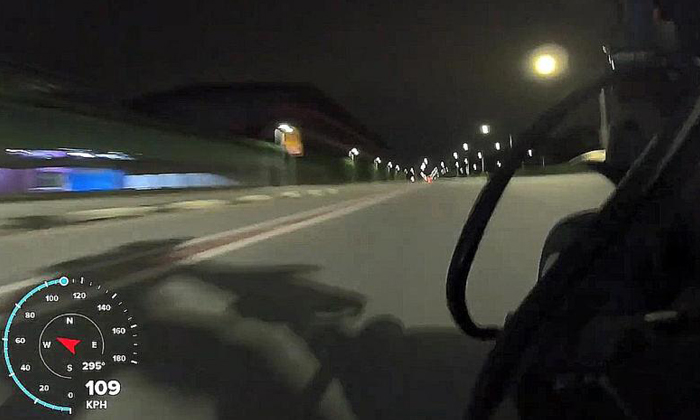 In the 40-second video clip, the black e-scooter zips along what looks like Tanah Merah Coast Road at night, as a virtual speedometer superimposed on the footage shoots up to 150kmh.

The video was uploaded on Facebook, YouTube and Instagram on Monday by Tune Extreme, which claims to be a one-stop shop for upgrading and modification of personal mobility devices (PMD).

Among other upgrades, it offers motors with "crazy torque" on its Facebook page.

The New Paper understands Tune Extreme is a home-based operation.

Retailers told TNP that a cottage industry for illegal modification services still exists despite the authorities cracking down on errant PMD users .

In a Facebook post yesterday, the Land Transport Authority said it detected 1,700 active mobility offences in the first half of this year. A third of them were for using non-compliant devices.

Under the Active Mobility Act, PMDs cannot weigh more than 20kg , be wider than 70cm, and move faster than 25kmh.

It is illegal to alter a PMD to be non-compliant for use on public paths. First-time offenders can be fined up to $5,000, jailed for up to three months, or both.

Mr Jay Jin, general manager of Kernel Scooter, said it is possible to modify an e-scooter to run at 150kmh.

He added that he gets requests to modify PMDs or to install third-party parts, but "we reject these requests because it is against the law".

"But a lot of users import parts themselves and look for shops to install for them," he said.

Mr Jin said it is not hard to access illegal modification services, as home-based firms advertise on Facebook and online marketplace Carousell.

He added: "They don't have a physical shop, so it is not easy to crack down on them."

Mr Jin was surprised to see the video of a modified e-scooter allegedly speeding at 150kmh on a Singapore road because riders here tend to go overseas to get their fix for speed.

"We are definitely concerned because it gives the PMD community a bad name when they get caught."

Mr Chew Boon Hur, general manager of retailer Mobot, said illegal modifications are usually done by ad-hoc, unregistered businesses, but they and their customers are a small minority.

"Most reputable retailers and repair shops don't do non-compliant modifications," he told TNP.

More common are minor modifications such as increasing battery capacity or making devices more powerful to make it easier for heavier riders to go up slopes.

Mr Chew added: "Even for vehicles, there has been a market for so many years. You still see people doing illegal modifications to their cars. There are always people who will test the system."

He said one reason he discourages his customers from making modifications is higher safety standards.

From 2021, motorised PMDs on public paths must be certified with the UL2272 fire safety standard, and it is now illegal to sell or lease out non-certified devices.

Mr Chew said: "(UL2272) is not just about the battery, it is about how the different components interact to make the device safer. Once you change these components, it becomes a non- certified device.

"Unlike previously, you can no longer just change the battery as and when you like."

Mr Koh, who is also the chairman of PMD enthusiast group Big Wheel Scooters Singapore, said: "These people turn their home into workshops and some even store batteries, which is dangerous... there is a risk of fires happening."

When this reporter called Tune Extreme's mobile number, there was no answer.

A man later called back but declined to comment on the video.

Commenting on the video, Mr Koh said such devices are not designed to run at such high speeds.

"If the rider were to hit a pebble and fall at that speed, it would most likely be fatal," he added.

"This is a new level of stupidity, which we condemn. He should not be riding on the road and endangering others."