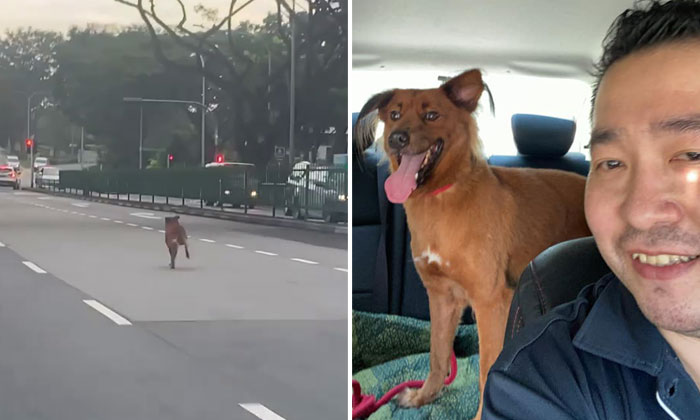 A dog and his fosterer were finally reunited after the dog went missing for five days.

Several posts were shared on Chained Dog Awareness in Singapore's Facebook page appealing for help from the public to locate the dog named Chestnut.

Posted by Chained Dog Awareness in Singapore on Saturday, October 23, 2021

Chestnut broke away from his leash when it was spooked during one of its regular walks on Saturday (Oct 23).

It was caught on video that evening sprinting along Bedok South Avenue 1 towards Laguna Flyover.

Chained Dog Awareness in Singapore provided updates on Chestnut's location over the next few days.

On Sunday (Oct 24), it was spotted by feeders at a field in Tampines North.

He was also spotted several times along East Coast Beach on Tuesday (Oct 26).

However, he kept running away.

Chestnut is described as "skittish" and people were advised to avoid calling his name, chasing or approaching him.

On Wednesday (Oct 27), a post announced the elusive Chestnut had finally been found and reunited with its fosterer, Jeff.

The post thanked the many people who played a part in helping to find Chestnut, including an animal communicator.

Chestnut is secured!!! Thanks to everyone who have stepped forward to help. He sensed our worries and concerns and made...

Posted by Chained Dog Awareness in Singapore on Tuesday, October 26, 2021