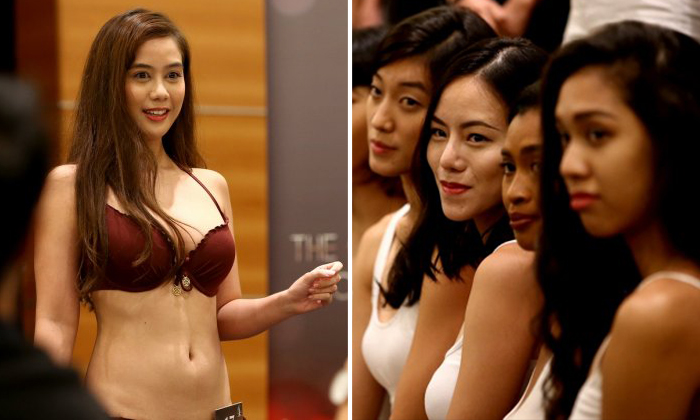 After facing down bullies during her formative years, Miss Universe Singapore (MUS) 2017 Top 20 finalist Sharmen Diana Frugtniet wants to help others going through it.

The 19-year-old was one of the 34 contestants from round two at the MUS closed-door auditions last Saturday who spoke of the causes she wanted to promote through the pageant.

Eventually, 20 women were selected as MUS finalists and they want to show that beauty is more than skin deep.

Around 60 candidates were shortlisted from the online registration, which ended on July 14, for the audition at Singapore Press Holdings.

Miss Frugtniet, who is studying Early Childhood Studies at KLC International Institute, told The New Paper: "It feels so surreal and I feel thankful to be in the Top 20 this year."

She was severely bullied in primary and secondary school because of her Malay-Eurasian ethnicity.

But Miss Frugtniet told the five-member judging panel that she wanted to stand up to the haters.

She said: "I don't take what people say as criticism, I will always take it as motivation... Failure is what brings success to me.

"I want to stop bullying and show that what they do is wrong. I'll be the role model to show them whoever you bully is going to go somewhere (in life), and you just watch them."

For round one of the audition, contestants had to go on stage and give a short introduction of themselves.

While they went for a lunch break catered by Mum's Kitchen Catering, the judges deliberated and narrowed the field down to 34 candidates, who proceeded to the bikini and Q&A segment that comprised round two.

The latter allowed the judges to get up close with the hopefuls and listen to their life stories.

It was then that many women spoke about having to deal with difficulties in the past, such as bullying and eating disorders.

This is the first pageant for Miss Rudihra Ramathas, 26, who also holds a cause very close to her heart.

She said: "I hope I'll be able to use this pageant as a platform to champion female rights and be a voice against domestic violence."

Miss Ramathas, a pricing analyst who studied business administration at Australian National University and holds a Masters in accounting from RMIT, added: "Through this pageant, I hope to develop as a person and build more confidence."

The oldest finalist this year is Miss Dalvin Kaur, 28.

The controls associate in a bank had received a surprise when her younger sister signed her up for MUS without her knowledge, but she is now out to prove herself.

Miss Kaur said: "It's nerve-wracking and pressurising since there are many youthful faces, but this is my one last shot. So I thought, 'Why not try something new?'."

She added: "I want to show beauty and brains can co-exist, and I hope to bring maturity and experience to the table."

Besides hoping to grow as a model, the Nanyang Academy of Fine Arts theatre student said: "I came here to make a difference, be it for the environment or education for children around the world who aren't receiving it.

"I'm very focused and determined to spread that message and make an impact."

Miss Universe Singapore 2002 winner Nuraliza Osman, who is also the national director of MUS, said her fellow judges were looking for well-rounded women and they were not disappointed.

She said: "I'm very pleased to see girls who spoke very, very well and who have achieved so much in their lives, yet are humble and very beautiful."

Another judge, dentist Jerry Lim, 46, said he was looking for contestants who were "real" - and that was what he got.

Dr Lim said: "They had (gone through) a lot of adversity and have many aspirations, which set them apart and will allow them to connect with others.

"That's what we were interested in - where they have been, where they are and where they're going."