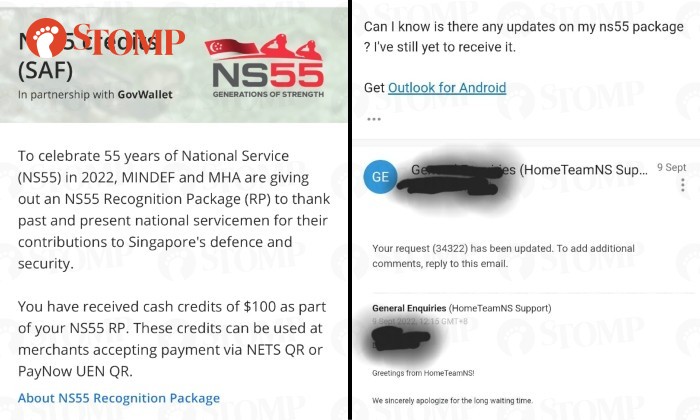 A Home Team NSman has been asking the Ministry of Home Affairs (MHA) since August why he has not received his NS55 credits yet.

The credits were disbursed to eligible national servicemen on the LifeSG app starting in July.

Stomper Matthew said: "As we all know, most male Singaporeans who have done their NS or in-camp training would receive the $100 credit in their LifeSG app from July as what the Government said."

He told Stomp: "Just so you know, there are some of us out here who have not received it.

"E-mails were sent to MHA and the replies were all the same, such as 'still processing' or 'still looking into it'. Seriously, from Aug until Oct, nothing was done?" 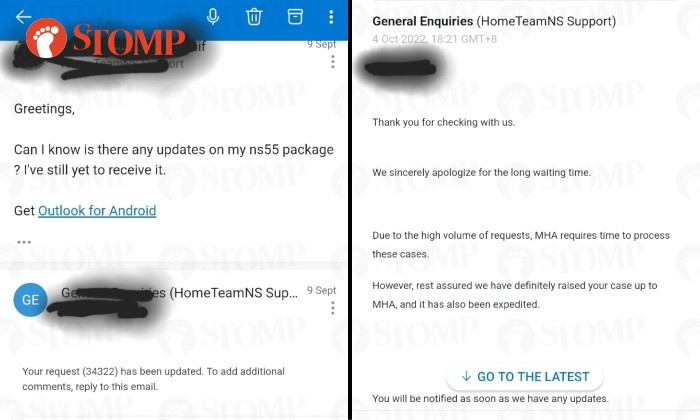 In response to a Stomp query, MHA said: "Since July 2022, the Ministry of Home Affairs has disbursed NS55 credits to the vast majority of Home Team national servicemen who are eligible for the NS55 Recognition Package.

"Additional checks were required for a small group as their records date from a few decades ago and there were some issues with the data, or they were transferred from the Singapore Armed Forces (SAF) to the Home Team and we needed to cross-check with the SAF. These Home Team NSmen would since have received their credits by Nov 18.

"The NS55 digital credits are valid for one year from the date of disbursement. NSmen who receive the NS55 credits later will still have one full year to utilise the credits from the date of receipt."

Stomp has contacted Matthew to find out whether he has received his NS55 credits.

Related Stories
When fate persists: ICA couple didn't realise they were next-door neighbours
SAF engineer deepens his skills at ITE, hopes to inspire others to keep learning
Officer upgrades his skills at ITE after 30 years with SAF
More About:
money
national service
credit