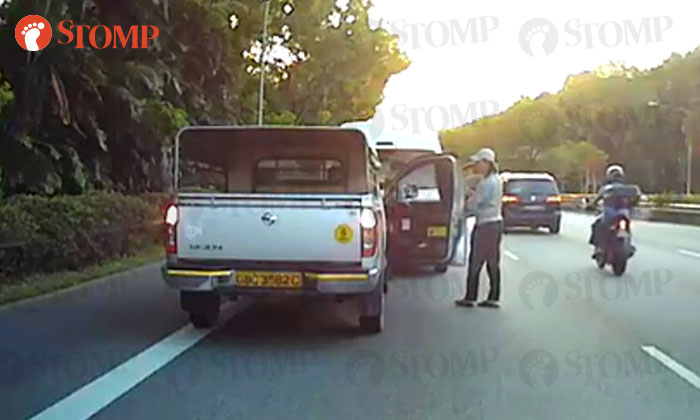 A mini-bus operator was recorded on camera blocking a pick-up lorry before alighting and confronting its driver on the Tampines Expressway (TPE) yesterday (Aug 19) at around 7pm.

Stomper Shus who took the video, was travelling behind both vehicles before the incident took place.

In the clip she sent, the lorry can be seen on the third lane of the expressway while the mini-bus was occupying the second. The motorists were driving side by side.

The mini-bus operator then appeared to be trying to filter into the third lane, but the lorry was in its way.

The driver of the lorry manoeuvred his vehicle to the edge of the road shoulder as the mini-bus inched into his lane.

After the halfway mark of the video, the mini-bus operator eventually overtook the lorry, and subsequently stopped in front of the vehicle.

He then alighted to confront the lorry driver. He can be seen making hand gestures as he opened the door of the lorry to speak to its driver.

The Stomper is unclear what happened thereafter as she left the scene moments later.