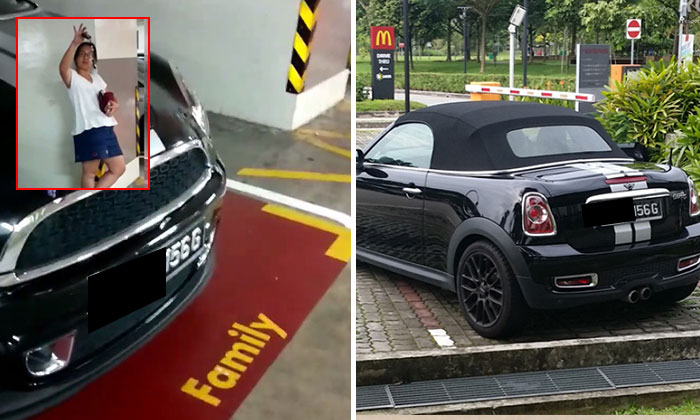 A woman caught on video flaunting her wealth after being confronted for parking on a family lot is revealed to have a history of hogging up lots with her inconsiderate parking.

In the video uploaded, Facebook user Daniel Choo accuses the woman of cutting the queue and taking the family lot, despite being alone.

When he confronted the woman over her actions, she told him that she ‘got money to burn’ and even boasted about having three cars, flashing a bunch of car keys.

In light of the viral video, photos showing the woman’s MINI Cooper parked terribly outside a McDonald’s branch at Jurong Central Park have resurfaced.

Although the licence plate of the vehicle has been partially blanked out, Stomp has verified that it is the same MINI Cooper as the one shown in the recent viral video.

The photos were taken on May 2, 2017, according to the time stamp on them.

The person who took the photos also recounted his encounter with the woman in a Road.sg post dated May 9, 2017.

“Spotted this car twice in Apr 2017 parked inconsiderably at McDonald at Jurong Central Park. Thinking this was not intentionally, so I just ignored.

“This time I saw the driver who is a middle-aged lady sitting inside the car with the door opened. I approached her and told her very politely that she should park properly and this is the fourth time I’ve seen her inconsiderate parking.

“I got a very rude response from her.

"She said, “Never Mind! Go ahead and take my picture. I am rich! I am very rich!"

“ I responded to her by saying “God Bless you!” and she drove off.

“Today, May 9, 2017, spotted her parked right in the middle of two lots. Unable to take pictures due to the rain."

“I believe she will continue the same inconsiderate behaviour until we put her to shame!”

Another netizen also shared her experience with the same woman years ago at the Jurong Central Park carpark.

However, do drop us a message if you too had a run-in with the woman and would like to share your experience with us.

Related Stories
Woman parks in family lot, then tells man with kids that she has 3 cars and money to burn
Are people using underwear to 'chope' shared bikes now or is this a prank?
Subaru driver holds up traffic at Punggol for 3 minutes -- only to park in loading bay
More About:
inconsiderate
parking
inappropriate