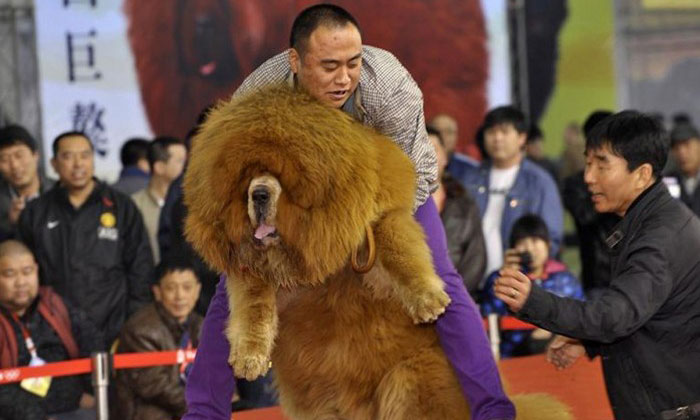 They say every dog has its day - and how true it is for the ultra-burly Tibetan mastiffs that went on to become the most expensive dog in the world.

Once the pets and battle animals of ancient nomadic tribes in Central Asia, the majestic hairy mutts with a lion's mane - especially the red ones - became the must-have status symbols for China's nouveau riche in the early 2000s, fetching eye-popping prices as high as $2 million.

But sadly, their heydays are over after being hit by a double whammy.

After Chinese President Xi Jinping launched a crackdown on financial corruption in 2013, China was also hit by a prolonged stock market turbulence in the past two years, forcing the upper class to cut spending on big investments and luxury items.

Things conspicuously seen as overly extravagant, like the prized mastiffs and limousines - especially those owned by officials - vanished from the streets at the same time as demand for lavish gifts fell dramatically.

In line with the crackdown was a ban of the large dogs in capital Beijing and Shanghai, where it was not uncommon to see the affluent walking the streets with their pampered mastiffs.

Indeed, the dogs and their breeders have become victims of the fallout as average prices have plunged to between $600 and $6,000, now depending on the dog's appearance.

FROM PRIZED PETS TO STRAYS

Today, thousands of them are languishing as strays in rural Tibet after they were abandoned when hundreds of breeders closed shop.

Last week, Beijing Youth Daily reported on its WeChat account on how thousands of the unvaccinated dogs wandering around villages and temples had attacked people and killed livestock, as well as animals like the protected snow leopard.

Although animal shelters had emerged in recent years to accommodate the mastiffs in Northwest China's Qinghai province and Southwest China's Tibet autonomous region, they could not cope with the sheer number of homeless canines, reported Global Times.

A Beijing-based dog seller told the Global Times: "A dog [Tibetan mastiff] with excellent appearance could be sold at 3 million yuan (S$615,000) at the peak time. But the average price now is between 3,000 yuan and 30,000 yuan."

The dogs' strong fertility is another reason for the alarming increase in their population.

Giving an example, the head of a Xi'an-based animal protection group said a shelter built to house thousands of the Tibetan dogs became overcrowded within a few months.

As the shelters have been facing financial and operating difficulties since it costs a lot to raise the dogs, he suggested that local governments and animal protection groups tackle the issue jointly, adding that culling could be one solution apart from sterilisation.

That year, an animal-welfare group rescued 20 abandoned mastiffs from the back of a lorry, which was taking them to a slaughterhouse to be sold for leather and meat for less than $7 each, reported The Economist.