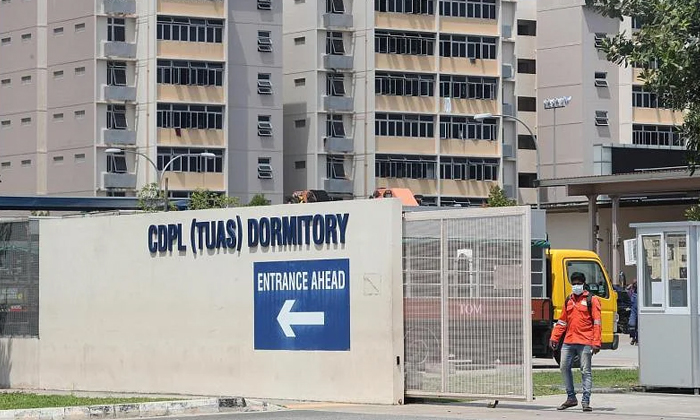 What began as a playful act of hitting each other escalated into a scuffle and resulted in a Bangladeshi national stabbing another with a kitchen knife.

The victim suffered lacerations in his small intestine as a result and had to be hospitalised for two weeks.

Hossen Md Midul was sentenced to six months' jail on Tuesday (June 21) after pleading guilty to one count of voluntarily causing hurt to his roommate at CDPL Tuas Dormitory on Jan 13 this year.

The court heard that both men, aged 24, were working at the same company at the time.

At around 7.30pm on Jan 12, Hossen and the victim were playfully hitting each other.

This escalated into a scuffle and they had to be separated by five other roommates living in the same dorm room.

Deputy Public Prosecutor Kwang Jia Min said: "The accused felt angry at the victim over the scuffle and could not sleep on the night of Jan 12. He then formed the intention to cause hurt to the victim."

Past midnight, on Jan 13, Hossen retrieved a kitchen knife while his roommates were sleeping.

He then used it to stab the victim on the left side of his abdomen and fled to the exercise corner in the dormitory.

The victim woke up to a sharp pain and found a knife lodged in his abdomen. He alerted the police, who later arrested Hossen.

According to a medical report presented to the court, the knife had narrowly missed the victim's abdominal aorta, which is the main artery that supplies blood to the lower body.

If ruptured, it could have led to life-threatening internal bleeding.

The victim had to undergo surgery to have part of his small intestine removed and the remaining parts sewn back together. He was given 28 days' hospitalisation leave.

The maximum penalty for voluntarily causing hurt carries a seven-year jail term, a fine and caning.

Related Stories
10 arrested after man gets stabbed in back with 20cm tactical harpoon at Ming Arcade
2 men charged over planned attack that left victim with stab and slash wounds
Man stabbed HIV-positive friend who was supporting him financially and wanted to end friendship
More About:
attack
stabbing
dispute
court