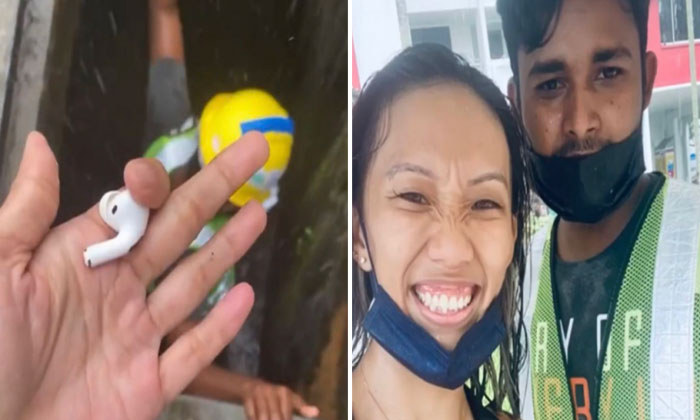 She was cycling in rainy weather when one of her AirPods Pro fell out of her ear and landed inside a deep drain.

The woman, who goes by Elaine Liu on TikTok, sought help and found a migrant worker nearby who saved the day.

The worker, whom she referred to as Mukul, walked the length of two bus stops under the heavy rain to where the drain was.

He then climbed down the slippery drain walls to retrieve the AirPod, a pair of which retails for around $270.

Ms Liu was "so touched" by what the worker did that she snapped a selfie with him, and uploaded a video of the kind act on TikTok on March 15.

@10.lifts Was cycling and my airpods pro just flew out when I accidentally brushed my hair, so heng that it fell right into the drain !! Found this guy #Mukul ♬ original sound - Elaine Liu

Many commenters praised Mr Mukul's kind deed, and suggested he be rewarded for helping the woman.

One even wanted to find out where Mukul worked to give him some cash "for being so kind".

Ms Liu responded in comments that she had taken his name and number down, and intends to give him a treat.