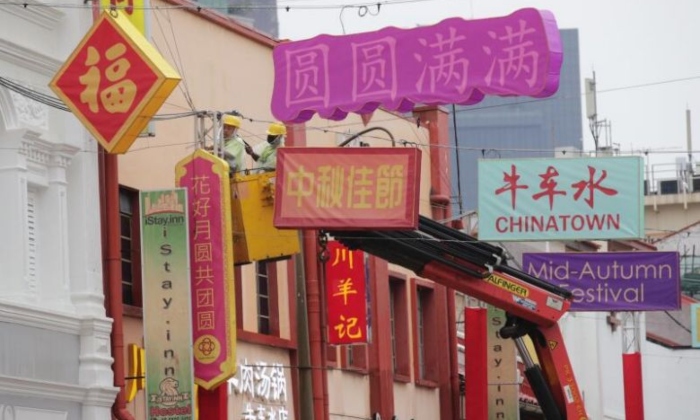 About 10 ornaments to mark the Mid-Autumn Festival were taken down on Saturday (Sept 12) night following comments from the public that they bore Chinese greetings that did not suit the occasion.

The banner-like lanterns had been strung up above South Bridge Road on Sept 10, ahead of the traditional street light-up in Chinatown that will take place from Thursday (Sept 17) to Oct 16.

This year's light-up is set to comprise about 700 lanterns and sculptures which depict traditional festival motifs and characters such as Chang'e, goddess of the moon in Chinese mythology.

However, before the official light-up ceremony on Thursday, keen-eyed members of the public found some of the greetings on the China-made decorations to be inappropriate.

While some of the greetings were typically associated with the Chinese New Year, others were not coherent.

For instance, one ornament bore a message in Chinese that translated to "bright and majestic", which is not a traditional phrase, while another said "joy for the nation".

Facebook user Teoh Chee Boon said the decorations were an erosion of the Chinese culture, and opened Singapore's Chinese standards to criticism.

Responding to media queries, Ms Jennifer Lee, head of the Chinatown Festival Street Light-up Sub-Committee, explained that some of the greetings - like one that read "the stars shine" - might seem unconventional, but were meant "to recreate the famous retro-Hong Kong ambience" featuring many neon signs.

She added that the Hong Kong-style decorations are unique to South Bridge Road for this year's light-up, while more traditional decorations associated with the festival like lotus flower lanterns and animal lanterns will be found in Eu Tong Sen Street and New Bridge Road.

Ms Lee also said that as the committee was testing some of the lights on Friday, it noticed that some of the designs that it had previously asked contractors to remove were still put up.

Although the committee had asked for the designs to be removed before production began, the changes "were not made in time", she said.

These included the one with the "joy for the nation" greeting.

The committee is working with the contractor to have the decorations replaced by Wednesday (Sept 16), in time for Thursday's light-up ceremony, which will be live-streamed.

Last year, organisers had to repaint a two-storey lantern of the mythical character Chang'e following complaints that it bore little resemblance to the goddess of the moon as its facial features looked too masculine.