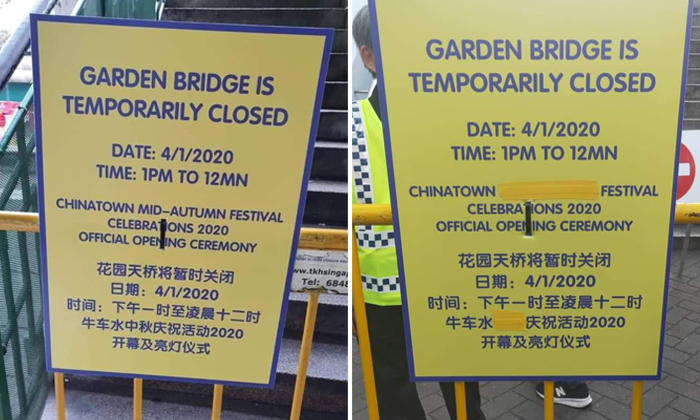 President Halimah Yacob was invited to a light-up ceremony in Chinatown to kick-off Chinese New Year celebrations, but the spotlight unexpectedly fell on a signboard instead.

The signboard, which notified members of the public about a temporary closure of the Garden Bridge on Jan 4, stated the event as the official opening ceremony for "Chinatown Mid-Autumn Festival Celebrations 2020".

The problem? We are celebrating Chinese New Year in January instead of the Mid-Autumn Festival, which falls on Oct 1 this year.

Before-and-after photos of the signboard were posted on Facebook and show how the error was covered up with tape.

In response to media queries, a spokesman for the public relations company in charge of the event told Lianhe Zaobao that the error arose from the carelessness of the printing company.

The organiser immediately rectified the mistake with yellow tape upon being notified of the matter.

According to the event website, the Chinatown Chinese New Year Celebrations 2020 Official Light-Up and Opening Ceremony consisted of spectacular firecrackers and a fireworks display to usher in the Year of the Rat.

This is followed by seven weeks of street light-up along Chinatown till Feb 24.

During this time, visitors can shop for Chinese New Year delicacies, decorations and other goodies from a total of 329 stalls there.

Related Stories
Error-filled poster offering tuition gets schooled instead at Ang Mo Kio
Can you spot all the grammar mistakes on this poster for English tuition?
Sengkang resident who left vulgar note about "stupid drumming" gets free English lesson
More About:
error
signboards
sign
fail