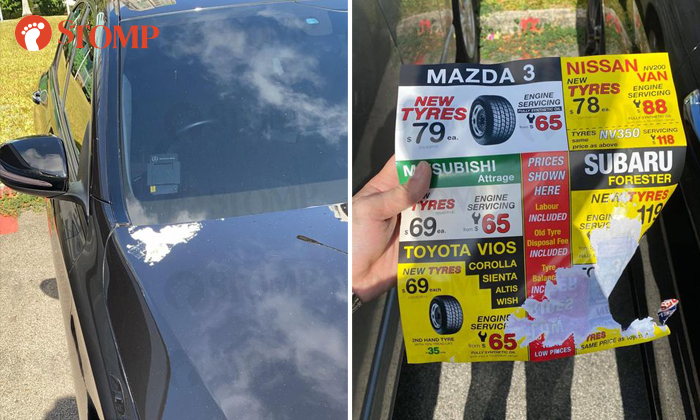 A flyer advertisement left a deep impression on Stomper Tan and his Mercedes — literally.

Stomper Tan said his car had been parked at the Dawson area in Queenstown on Saturday (May 8) when he noticed the flyer stuck on his bonnet.

A video taken by the Stomper shows him removing the flyer from his bonnet. However, the flyer does not come off completely as it had been pasted to the car.

Part of the flyer can be seen stuck to the car bonnet along with sticky residue.

Tan told Stomp: "I called the company on the flyer. They gave me another number saying it's their manager but it was an invalid number.

"When I called the company again, they did not pick up my call.

"I had to spend time and my own money to redo my polishing and coating, which costs $500."

Tan decided to share his predicament after reading a Stomp article about another driver who had a similar encounter.

In that incident that also occurred on Saturday, Stomper Jo found a business card stuck to his car windscreen in Yishun.

Similarly, the business card left behind stubborn residue on Jo's car and attempts to contact the company were in vain.

"Guess I have to bear the charges for the damage," Jo said in the May 12 report.