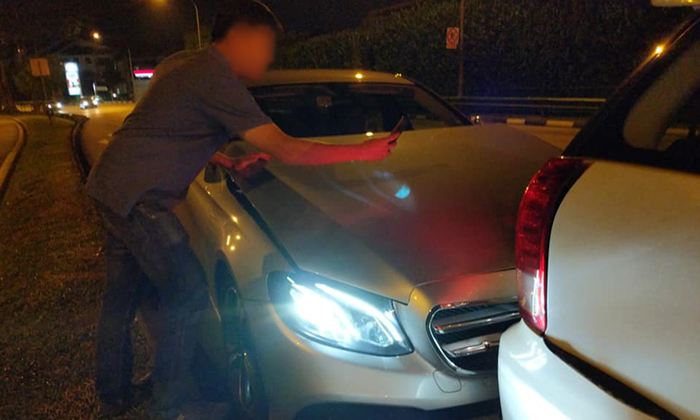 A Mercedes driver fled the scene after causing a chain collision along Upper Thomson Road in the wee hours of New Year's Day (Jan 1).

Facebook user Jared Koh posted about how the Mercedes had hit the rear of his car, which in turn caused him to collide with a taxi in front.

In his post, which several Stompers sent to Stomp, Jared said the incident occurred at around 2.23am and alleged that the Mercedes driver had been drink-driving.

According to Jared, the Mercedes driver did not have a "steady gait" and "had a smell of alcohol".

"I wanted his details but he was reluctant at first. He then decided to show me his driver's license, of which I took a photo of," wrote Jared.

"He wanted to settle without the police, but since the accident was really bad, I told him I have to call the police. He then panicked and decided to flee.

"He reversed and tried to drive off, but stopped at the traffic light. I ran after him and told him to pull over at the side or it'll be worse for him if he fled."

However, the Mercedes driver waved Jared off and drove away with three female passengers instead.

Responding to a Stomp query, the police said they were alerted to an accident involving a taxi and two cars along Upper Thomson Road, towards Sembawang Road, at 2.26am.

"One of the taxi passengers, a 22-year-old man, was conscious when conveyed to Tan Tock Seng Hospital," added a police spokesman.

Stomp understands that the passenger had back pains.

No arrests have been made yet as the Mercedes driver fled the scene.