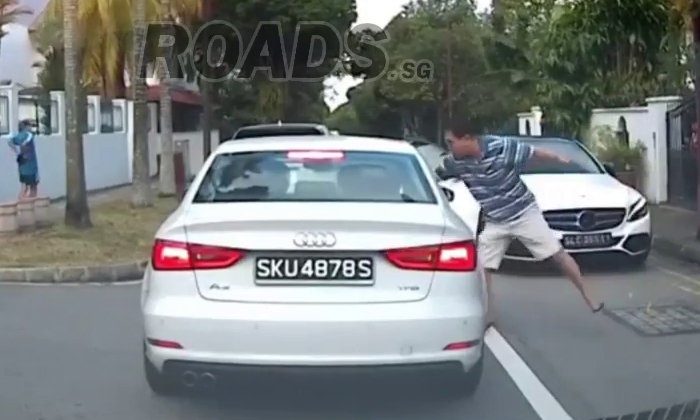 A man was caught on camera throwing a punch at a driver who apparently did not reverse for him.

Facebook page Roads.sg posted a video of the incident that occurred along Kovan Road on Saturday afternoon (Jan 15), at around 4.40pm.

The dispute started after a Mercedes driver asked an Audi driver and a third motorist to reverse their vehicles so that he could "turn into his residence", stated the video caption.

The motorist, who witnessed the altercation and submitted dashcam footage to Roads.sg, said: "But there is no yellow box and we have the right of way too.

"We didn’t comply so he punched the owner of the white Audi, and later approached me too.

"Hope this video helps the owner of the white Audi and hope he is alright, and kudos to him for not retaliating."

The Facebook video has garnered over 128,000 views and almost 500 comments after it was uploaded on Monday.

Netizens have been debating over who is to blame for the incident.

One user said, "Actually Audi and cam car move back a bit each, then Merc can go in and all of you can continue already. Now gridlock and ppl still want to stand right of way and nobody can move."

Another added, "This is bloody stupid. Merc driver could have drove forward more so that Audi can turn out."

A netizen also weighed in and said, "Both big ego don’t want to give way. Then too bad."

However, some felt that nothing excused the Mercedes driver's behaviour and asked the Audi driver to lodge a police report.

Several also asked if there was more to the "no head no tail" video. They noted that the video is audioless, with one user stating, "Makes you wonder what the Audi driver said too and if he would show the world his own car cam recording including audio."