Mercedes driver hits van, causing it to flip over in KPE -- then drives away 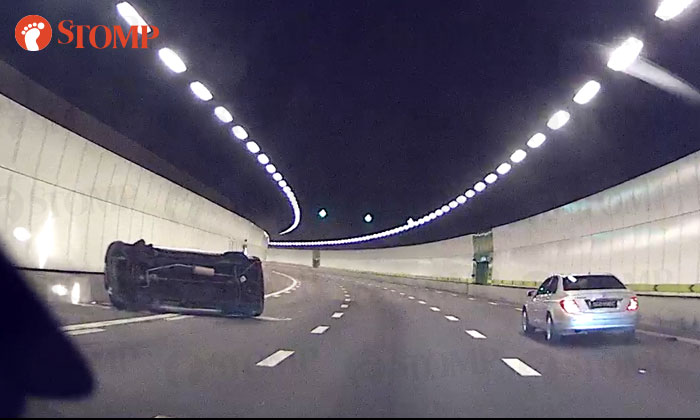 Stomper CK was driving along the Kallang–Paya Lebar Expressway (KPE) yesterday (Jan 22) at around 3pm when he saw a silver Mercedes hit the side of a van, causing it to flip over in the tunnel.

In a video shared by the Stomper, the van driver lost control of his vehicle after getting hit by the Mercedes driver who appeared to be changing lane.

This caused the vehicle to swerve and tip over on its side.

The driver of the Mercedes slowed down but did not stop his vehicle. Instead, he simply drove off.

"I was shocked that he didn't stop," said CK.

CK added that he and two other drivers stopped their vehicles to help pull the driver out of the van.

"He was in shock but did not appear to be injured," he said.

In response to Stomp media queries, a police spokesman said that they were alerted to an accident involving a van along the KPE towards the Tampines Expressway (TPE) at 3.12pm yesterday.

"No injuries were reported," he said.

Related Stories
Merc driver flees and beats red light after hitting GrabCar: Police investigating
Motorcyclist and pillion rider thrown off bike after getting side-swiped by driver
Driver turns himself in to police, claims employer made him scapegoat for hit-and-run
More About:
accident
hit-and-run
van
tunnel
kpe