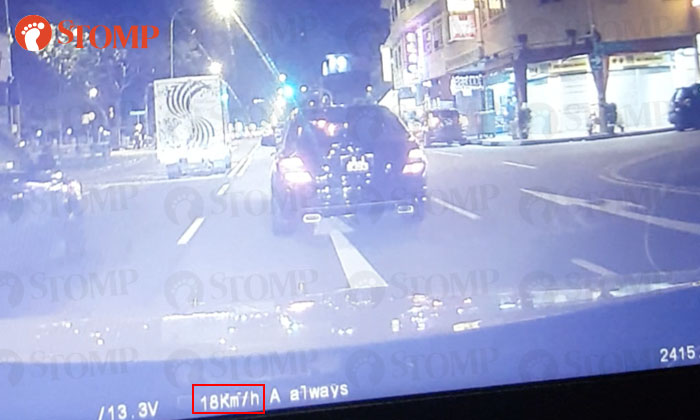 Stomper Jabir had a run-in with an errant driver of a Malaysia-registered Mercedes and his passenger along Geylang Road towards Sims Avenue on April 3, at about 1.10am.

In a phone interview, Jabir who drives a taxi recounted his frustrating experience.

Jabir told Stomp that he was driving in the middle lane of a three-lane road when he encountered the Mercedes ahead which was travelling at a very slow pace.

Footage from a dashboard camera on Jabir’s taxi shows that Jabir had to slow his vehicle to around 20kmh to trail the Mercedes.

Jabir said he thus sounded his horn at the Mercedes driver.

He then proceeded to move into another lane to overtake the Mercedes.

Later on, the same driver suddenly overtook Jabir, recklessly cutting into his lane before slowing down again.

The footage then cuts off abruptly.

Jabir said that after that, the driver drove up to him and asked him why he had sounded his horn at him, and Jabir explained to the driver that he had been driving dangerously.

A passenger on the Mercedes then reportedly shouted in Mandarin at Jabir and took a photo of Jabir, to which Jabir responded by shouting back the same thing, although he was unsure of the meaning.

The cabby added that the Mercedes driver told him that it was his own problem, and he could drive however he wanted to.

Jabir later called the police for assistance after stopping by the roadside, while the Mercedes driver made a turn towards Jalan Eunos.

In response to a Stomp query, a police spokesman said: "The police confirm that a report was lodged."