Merc van attempts to cut lane without signalling on KPE, car behind swerves to avoid collision 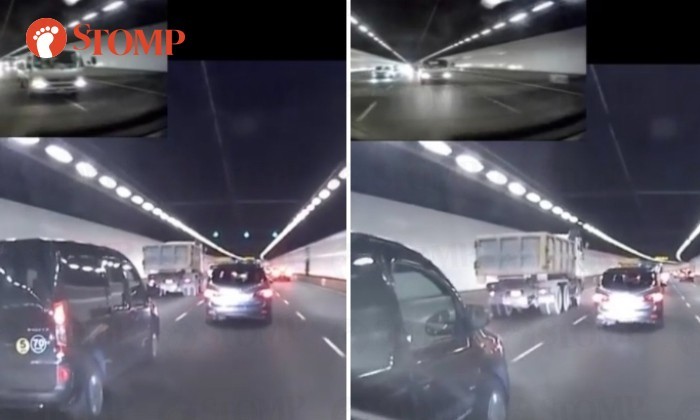 Ever had someone cut into your lane abruptly without signalling?

Stomper Kumarajan had, and was not pleased about it.

Kumarajan told Stomp that a black Mercedes-Benz van attempted to cut into his lane along the Kallang-Paya Lebar Expressway (KPE) on Friday (Sep 11).

He also sent video footage retrieved from his in-car camera.

"The van on my left was traveling behind a truck when the van driver suddenly swerved out and into my lane," the Stomper said.

"I had to swerve to my right to avoid a collision.

"He clearly did not check for traffic.

"This driver is seriously a dangerous road user without any road manners. He poses a serious threat to other road users."

Kumarajan also added that this was his first time encountering such a driver on the road.

"I have never seen a driver make such a last second filter to cut into another lane before," he said.

"He obviously did not check first and just took it for granted that others will give way to him.

"This is the type of driver who will cause fatal road accidents.

"I feel that the Traffic Police should take serious action and penalise these drivers.

"To all those irresponsible drivers out there, signal early if not no one will be aware of your intentions on the road."

Related Stories
Volkswagen driver overtakes and hits Merc that cut in front of him
Driver 'returns the favour' after Mitsubishi cuts in front of him along Farrer Road
Merc driver cuts across 4 lanes without signalling then gestures angrily at biker at Jalan Toa Payoh
More About:
car
van
Mercedes-Benz
dangerous driving
expressway
cut lane