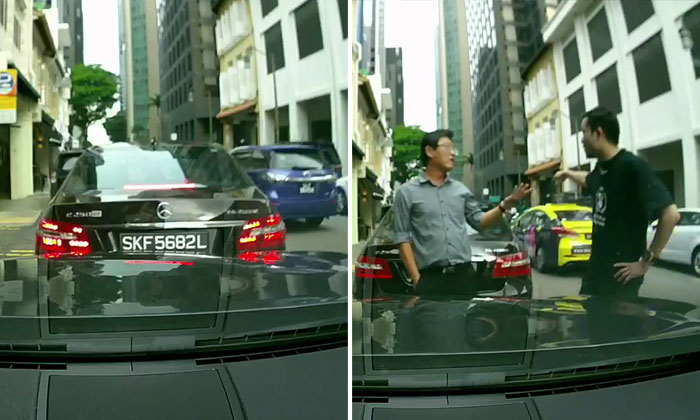 A Mercedes-Benz driver was caught on video shouting at another motorist, despite reversing into his car and almost hitting the other man at Boon Tat Street on Thursday (Apr 11).

A Stomper alerted Stomp to a Facebook post made by Donn Poh who caught the incident on his in-car camera, which happened at about 5.10pm.

In the video, the Merc driver is seen reversing into Donn's car.

His wife, who is standing on the pavement, expresses shock and gestures at him to tell him what he's done.

She brings her hand to her forehead before waving apologetically at Donn.

After Donn gets out of his car, the Merc driver reverses hi vehicle again and almost hits Donn who knocks on the car to alert him before anything happens.

The Merc driver then exits his car and starts shouting and gesticulating at Donn despite being in the wrong.

In a phone interview with Stomp, Donn said: "I was expecting him to come out and apologise but he just started shouting and screaming vulgarities at me.

"I didn't understand what he was saying and kept asking him to repeat himself but this just made him angrier.

Donn told Stomp that the whole interaction left him perplexed.

"I didn't understand what had gotten him so angry," he said.

"It couldn't have been a parking lot issue because there was an empty slot behind me and on the other side too.

"In the end, I told him that I didn't want to argue and offered to reverse my car in the lot behind me because he was parked along a double yellow line.

"My baby and pregnant wife were in the car so I did not want to escalate the issue and I didn't want him obstructing other motorists.

"I then told him to wait while I called for the police but he didn't and just walked away and left."

Donn added that his car's front bumper had scratches and dents following the incident.

Stomp has contacted the police for more information.

Related Stories
Cyclist slams his hand on car bonnet after 'refusing to slow down'
Cyclist falls down after bicycle wheel gets caught in grating -- then acts like it's cabby's fault
Volkswagon driver has the cheek to rage after 'inserting himself' in front of car
More About:
road rage
Mercedes-Benz
shouting
angry