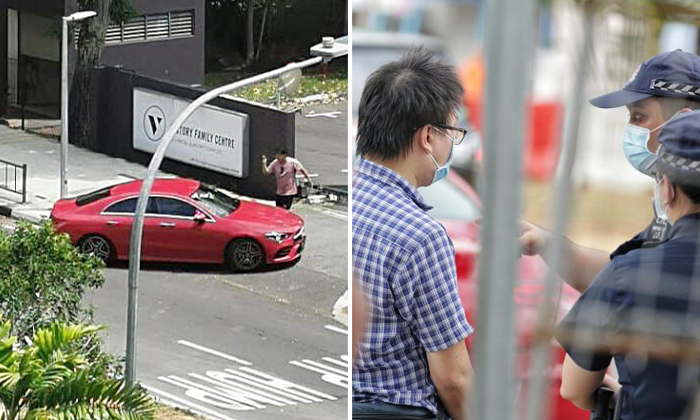 A 30-year-old man was arrested after the Mercedes-Benz he was driving allegedly knocked down the gate of Victory Family Centre's technical support centre in Toa Payoh on Wednesday afternoon (Feb 2).

In a statement, the police said they were alerted to a case of rash act involving a driver and a personal mobility device (PMD) rider along Lorong 4 Toa Payoh.

The driver was arrested in relation to the case, said the police, adding that no injuries were reported and investigations are ongoing.

According to Shin Min Daily News, a witness who identified herself as Ms Huang, 70, said she saw the car hit the gate after its driver had an argument with the PMD rider.

The car was heading west along Toa Payoh East when its driver first encountered the PMD rider, identified only as Mr Harun by Shin Min, at a pedestrian crossing about 25m from the entrance of Victory Family Centre.

Mr Harun, who is in his 20s, told Shin Min he was rushing to pick up an order from a restaurant nearby at the time.

After he rode across the crossing, an argument ensued between him and the driver.

He said: "I should have priority at the zebra crossing, but the other party tried to drive in front of me. I was very angry so I questioned the driver."

They crossed paths again in front of the family centre's technical support centre when Mr Harun rode past as the Mercedes was turning in. It was then that the car allegedly lunged towards the delivery rider.

"I didn't expect the car to suddenly rush forward towards me when I was passing by the entrance of the building, but I managed to dodge it before it hit the gate and knocked it down," said Mr Harun.

He added that the Mercedes then reversed and knocked into his PMD.

"Since I was not seriously affected, I don't want to pursue any further action. Everything will be handed over to the police," he said.

The Mercedes is a private-hire car, said Shin Min. It added that the driver was seen inspecting the front of the car which had scratches, while being questioned by the police.

The incident comes less than a month after a 61-year-old Bentley driver was arrested for using his car to push against a security guard who was stopping him from entering the Red Swastika School.