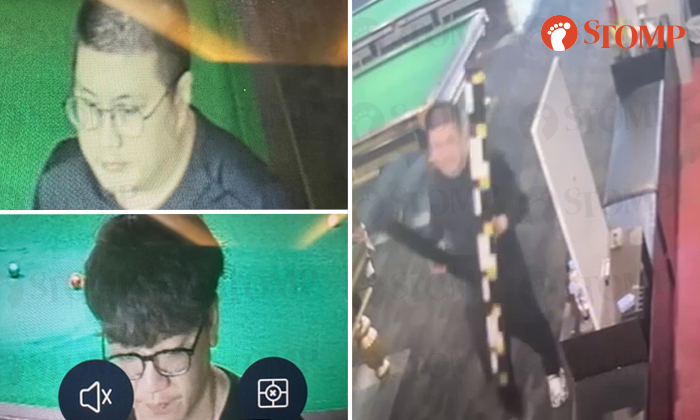 The two men have come forward to return the item, said Stomper Ben.

Ben told Stomp: "I sincerely thank you for your help as the culprits came to return the cue this morning. They actually called my boss to apologise and said they are very stressed from this incident."

The customised snooker cue is worth around $800 to $1,000, said Stomper Ben, a manager at Klassic Club, located at New World Centre in Jalan Berseh.

Ben shared CCTV footage of the incident that occurred at around 9.15pm and is giving the two men 48 hours to return the item.

Ben told Stomp: "After his game of snooker, one of our regular customers left his cue on the table as he went to pick up a call. When he came back, his cue and the cue case were gone as shown in the video.

"An unknown customer had taken both the cue and the case and gone straight out. He had arrived at the pool hall with another man and they both left together.

"I hope Stomp can share my appeal to the public for their help and attention as it is a limited edition customised cue worth $800 - $1,000. It’s also a crime to steal.

"The management wants to give this two men a chance to return the cue because they have probably been here to play before and we respect honesty.

"If they do not return the cue and case within 48 hours, we will go directly to the police.

"We would also like to remind all patrons everywhere to be careful of their belongings."

Related Stories
Man who stole $159 shoes from Eunos corridor, you have 24 hours to return them
Minimart posts CCTV of kids allegedly shoplifting, rejects netizen's offer to pay for them
Man puts on an act to steal 2 pairs of Adidas slippers in Hougang, deserves a Razzie
More About:
theft
stealing