Men smoke in taxi and refuse to get out: One even says, 'Can you take a picture for us?' 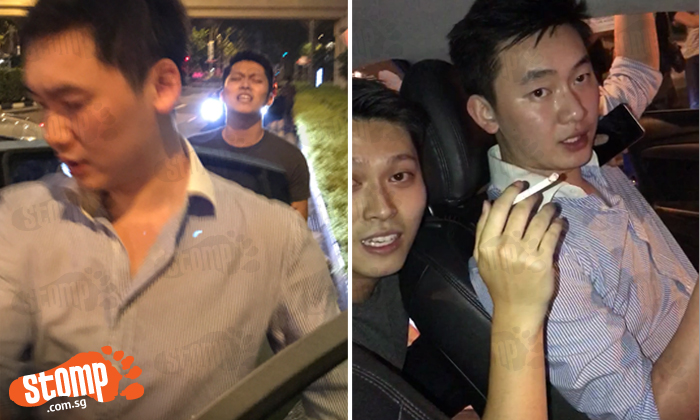 Two men and one woman boarded Stomper S's taxi along Middle Road at around 3am today (Dec 17), wanting to go to Redhill.

However, S told them that he was changing shifts and not going in their direction.

Yet instead of complying, the two guys refused to exit the vehicle and even started smoking inside.

"In the wee hours of a Saturday morning, Dec 17, I was driving my Comfort taxi along Middle Road beside South Beach Tower where many party-goers of a popular club were trying to hitch a ride home.

"A man in blue striped shirt suddenly dashed out of the road to stop my vehicle while I was driving towards another passenger who had earlier flagged at me and was wrongfully behind him.

"A group of two guys and one lady then hopped into my taxi. They refused to get out of my taxi despite me repeatedly telling them I was not heading towards their direction due to shift change.

"I had to shut my engine and get out to avoid any further aggression or prevent any physical attack as most experienced drivers would do.

"Shortly after, as seen in the video, the two man started smoking in the cab in a disdainful manner. The man in blue got out of the cab first while the other at the back seat put out his cigarette ashes in the taxi, refused to get out and invoked the call for police."

In the video, the second man can also be heard saying multiple times, "Can you take a picture for us?"

He also challenged S to call the police. S added:

"The call was made to the police and they left the scene before the police officers arrived. Sadly, as told by the officers, there were no criminal offences and they would not take any action.

"By sharing this video I hope there will be more legislations in future to protect taxi drivers from such errant passengers."

According to S, the lady had been trying to contact an Uber driver during the commotion. The trio then left when their Uber ride arrived.