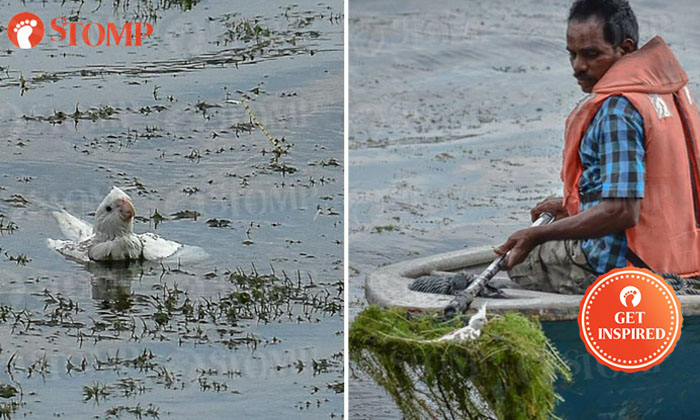 A white cockatiel was saved after getting trapped in Lower Seletar Reservoir at 4.30pm yesterday (Sep 30), during the celebration of the second anniversary of the House of Parrots, a bird supplies and accessories store.

Stomper Dickson, the administrative assistant of Facebook bird interest group page BirdCraze, and Stomper Nizam were invited to the event and sent Stomp pictures of the incident.

During the celebration held outdoors, Eugene, the owner of the cockatiel was busy when strong winds scared the bird causing it to fly off its parrot stand.

Due to a wing clip, it had no strength to fly long distances and had to land in the reservoir.

Wing clipping is the process of trimming some of the bird's primary wings off, so it is not fully flighted.

Eugene was busy talking to Marcus, the organiser of the event, when someone shouted that the bird was in the water.

Stomp also spoke to Eugene who described the incident and said: "The reservoir is located down a slope, quite a distance from the lawn. Keagan, another member of BirdCraze, immediately started running down to save the cockatiel."

"Everyone was panicking. Keagan dropped all his belongings and wanted to dive into the reservoir to rescue the bird. Luckily, we spotted a boat with two workers who seemed to be doing some maintenance work in it and asked them for help instead," Dickson said.

Using their net, they carefully scooped up the bird and passed it to Marcus to bring to dry land.

"The workers were very careful and the cockatiel was received by Marcus without injury," Eugene recounted.

Eugene was grateful to everyone that helped and posted his experience on Facebook.

While the whole incident was going on, Stomper Nizam, an attendee of the event was snapping pictures of what was going on. 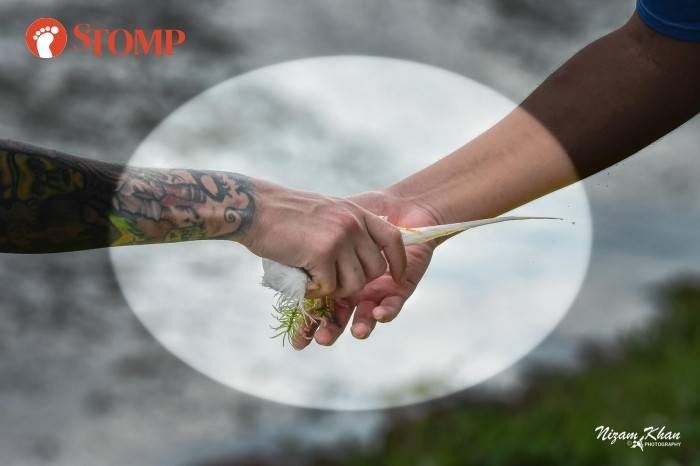 Dickson said: "This is not a normal story of a cat or dog stuck in the water, or a story about saving a bird on the tree. It is unusual and very touching, everyone coming together to rescue a small little bird in the water."

"BirdCraze appreciates Stomp a lot for helping us create awareness about caring birds and pets. It helped us with our rescue missions and get back parrots who were in danger. We really are grateful to Stomp," Dickson added.

Related Stories
Holland Road's badass and well-loved ah ma dies at age 112: Here's her amazing story
GrabHitch driver gets Stomp Goody Bag for fetching passenger and dog with fever when no one else would
Thank you, kind soul who couriered lost wallet back to me -- but you left something behind!
More About:
kind acts
birds
animal rescue