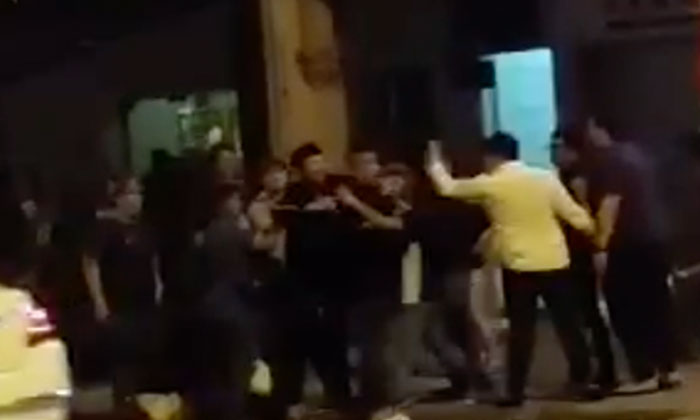 A video showing a series of fights outside a nightclub at Jalan Besar has been circulating on WhatsApp.

Several readers received the video and alerted Stomp to it.

The video begins with a group of men raining blows on a man lying on the road.

The videographer comments on the brutality of the beating, adding:

His female companion adds that the victim is the nightclub owner’s son.

“They step on his head like that. Won’t he die?”

He singles out a powerful 'fat man in white' from the group.

Meanwhile, another altercation breaks out not far from the victim lying on the road.

Two men start shouting and hurling vulgarities at each other.

A man wearing a long-sleeved shirt is restrained by several others, while he continues shouting aggressively at another man in black.

The two continue quarrelling, and the man in white suddenly walks up and delivers a punch to the man in the long-sleeved shirt.

He is held back by his companions, while the man in a long-sleeved shirt is also restrained by his.

The two groups then go their separate ways.

However moments later, another skirmish breaks out again.

“If we knew this was going to happen, we wouldn't have come.

“The man lying on the floor was really courting death. He just ran up to the group and started attacking them.”

It is unclear what triggered the fight.

"On March 20 at 2.02am, the police were alerted to a case of Affray at 251 Jalan Besar. A 23-year-old man was conscious when conveyed to Tan Tock Seng Hospital.

“Another four men were arrested in relation to the case.

Related Stories
Man who got knocked out in Geylang attack: I just looked at them and they started attacking me
Fight at Orchard Rd: Man, 25, arrested for rioting after being taken to hospital
New video of Geylang brawl shows clearly group raining blows on man while he was down
More About:
fight
injured
Jalan Besar