Men in their 60s hurl vulgarities and fight at Yishun kopitiam... over auntie 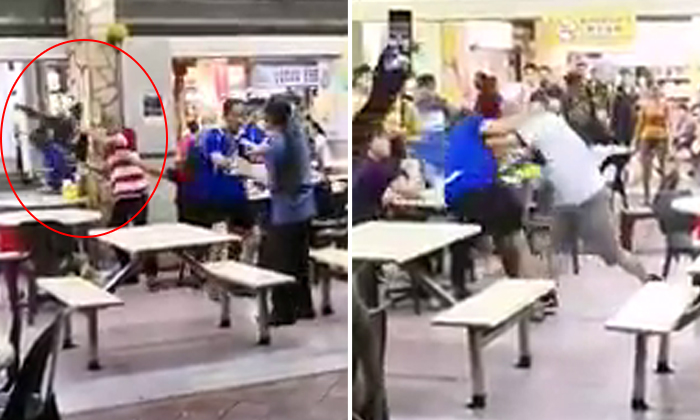 Facebook user Allan Lim uploaded a video of the incident, which occurred at S-11 Food House, and wrote: "Got nice show to watch".

In the video, at least four different men can be seen involved in the dispute:

The altercation appeared to have started with an argument between the first two men, during which they hurled vulgarities at each other.

Red Shirt also reached for a plastic chair at least three times and tried hitting Ponytail with it, while the latter repeatedly challenged his opponent to "come out" of the coffee shop.

Other onlookers tried to break up the fight, including a long-haired woman who was clad in a red striped dress.

She tried using a broom to separate the uncles and chair, only to be kicked onto the ground:

The dispute later escalate into a violent tussle between White Shirt and Blue Shirt.

Stomp understands that the men, all of whom are in their 60s, were fighting over the woman.

Other witnesses can be heard in the background laughing and calling the spectacle a "good show". They also egged on the men, making remarks such as "there are many chairs here", "no CCTV cameras here" and "fight ah, fight ah".

The woman later told Blue Shirt: "Not your business, why you fight with people?"

Responding to media queries by Stomp, the police said they were alerted to a case of affray at Block 744 Yishun Street 72 at 9.24pm.