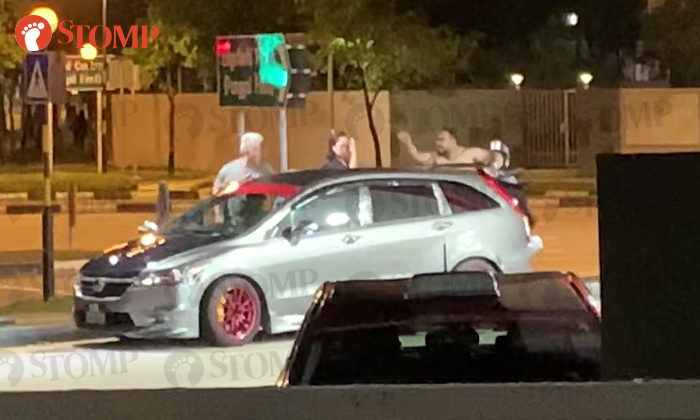 Two men were caught on camera exchanging swear words and punches at a petrol station along Punggol Central on Sunday (Feb 2).

Stomper Ami, who was in the vicinity, heard a loud commotion at SPC petrol kiosk at around 12.15am.

He told Stomp: "I think the man with light-coloured hair was a car driver, while the bigger guy with dark hair was a motorcyclist.

"I'm not sure what they were fighting about but it looked serious."

In a video that Ami recorded and submitted to Stomp, two men are seen shouting at each other. Vulgarities can also be heard.

Their voices get louder as the dispute becomes increasingly heated.

At one point, the man with light-coloured hair can be heard saying, "Want fight you fight!"

He also shouts at a woman who tried to intervene and told him, "Enough already."

The altercation turns violent when the man is shoved by his dark-haired opponent.

The two men are seen throwing punches at each other and falling onto the ground during their tussle, while bystanders scream.

Several passers-by step in to break up the fight and separate the two men, though it is unclear what happened after the video.

According to Ami, the police were not called.

Related Stories
2 arrested over Hougang fight: Man left 500m blood trail after 'showdown' with wife's 42-year-old lover
Man punches motorcyclist in middle of the road at Novena, falls over and nearly gets hit by car
3 men arrested after pummelling one another during vulgar 'boxing match' at Teck Whye Lane
More About:
fight
dispute
argument