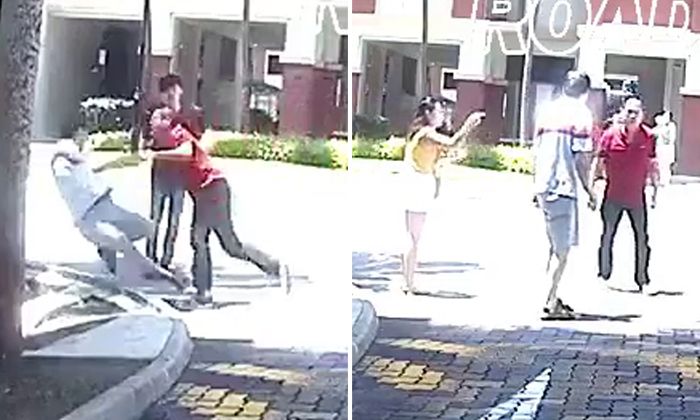 A violent dispute between two men culminated in a woman rushing over to intervene -- by tossing a bystander's mobile phone far away.

The incident occurred in front of Block 306 Canberra Road on Saturday (Feb 9), at around 1pm, according to ROADS.sg which posted a video on its Facebook page.

In the video, a man in red can be seen exiting his car after stopping in the middle of the road.

A woman clad in yellow and a younger guy in black also alighted from the car.

The car driver then confronted a bespectacled man, with the two coming to blows and taking a tumble onto the ground.

The woman is seen rushing over, picking up a mobile phone from the ground and flinging it far away.

However, netizens observed that the phone actually belonged to the younger guy who had alighted from the same car as the woman.

The phone is believed to have fallen out of its owner's hands during the men's altercation.

The younger guy can be seen walking off, presumably to retrieve his phone.

It is unclear what sparked the fight.

According to The Straits Times, the two men are a Gojek driver and his customer.

In response to media queries, a Gojek spokesman said: "The safety and well-being of our riders and driver-partners are our top priority.

"We are currently investigating this matter and it would therefore not be appropriate to comment further at this stage."