Men argue over queue-cutting at McDonald's in Clementi: 'Your father's road ah?' 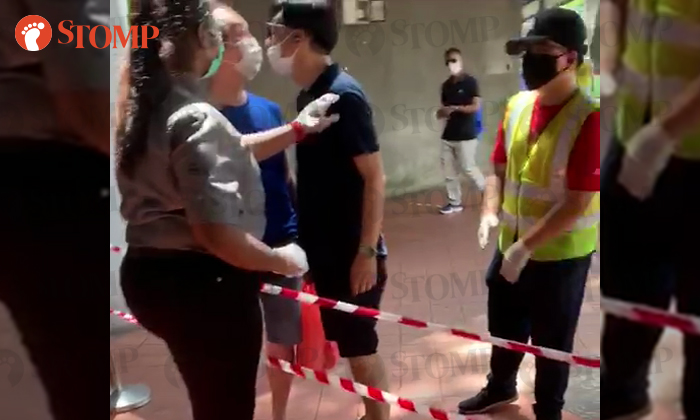 Fans were heartbroken when McDonald's announced a closure of all outlets island-wide due to the Covid-19 outbreak, and rejoiced when the fast food chain resumed operations for deliveries and takeaways three weeks later.

This love for the fast food giant is evident in two men who felt passionate enough to get into an argument over the queue at a McDonald's outlet in Clementi last Thursday (May 21).

Stomper Tim had witnessed the two men in a dispute at McDonald's Block 451 Clementi Avenue 3 outlet at around noon that day.

A video submitted by Tim shows one man asking the other: "Why are you there? No need to queue ah? Cut queue ah?"

The man can also be heard saying repeatedly: "Your father's road ah?"

Tim recounted: "They engaged in close staring and verbal scolding for around five minutes, after one guy apparently cut the queue to buy Coca-Cola.

"Thankfully, there was no physical fight as members of the public and McDonald's staff helped to pull them apart.

"The queue-cutter left after the quarrel while the other guy continued to queue."

Responding to queries, a McDonald's spokesman told Stomp that it is aware of the incident.

"The incident was swiftly resolved in about three minutes," said the spokesman.

"We encourage our customers to continue being considerate of all safe distancing measures for the safety and well-being of everyone."

Related Stories
McDonald's customer calls out other patrons for being 'socially irresponsible' as a joke, but netizens not amused
Police called in to Hougang McDonald's outlet after customer shouts at staff about changing his order
Drunk man arrested for causing annoyance at Pioneer Mall's McDonald's: 'Why look down on me?'
More About:
dispute
McDonald's