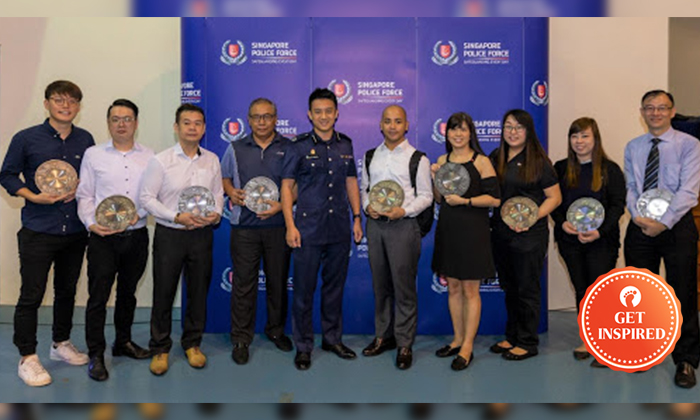 Nine members of the public were commended for their public spiritedness in a ceremony held at Bedok Police Division on Wednesday (Oct 23),

On May 17, 2018, Mr Tan Teck Heng assisted the police in arresting a man for criminal intimidation at Bedok Mall.

Together with responding security officers, Mr Tan subdued the man and handed him over to the police.

Officers from Bedok Police Division have been engaging stakeholders such as retailers, banks and remittance agencies to educate their staff on scams and train them to identify tell-tale signs.

On five separate occasions, staff of these stakeholders thwarted various scams through timely interventions in suspicious transactions. Together, they successfully prevented a potential loss of more than $100,000.

Mr Villasoto noticed a customer searching for a Bitcoin machine and offered his assistance.

Upon further checks, he realised that the approval stamp sent to the customer via a text message was fake. He then advised the customer to lodge a police report.

Mr Ismail observed a customer looking flustered while attempting to remit money. Mr Ismail felt something was amiss and dissuaded the customer from making his remittance transaction, which turned out to be a scam.

They managed to dissuade a customer from making a money transfer instructed by an unknown caller.

On Oct 7, Ms Sally Tay Siew Lan, a bank teller with DBS bank, assisted the police in preventing an impersonation scam and apprehending a male suspect.

Ms Tan attended to a man and woman who sought to withdraw a large sum of money. When probed, the man behaved suspiciously. Sensing that the man could be a scammer, she immediately alerted the police.

“What makes these individuals special is the commitment they share to keep their communities safe and secure; to not turn a blind eye to crime; and to take it upon themselves to help their fellow citizens in difficulty.

"Today, the Singapore Police Force has the opportunity to offer them a small token of our appreciation.

"We hope their exemplary conduct will inspire others to step forward and serve their communities for a safer tomorrow.”