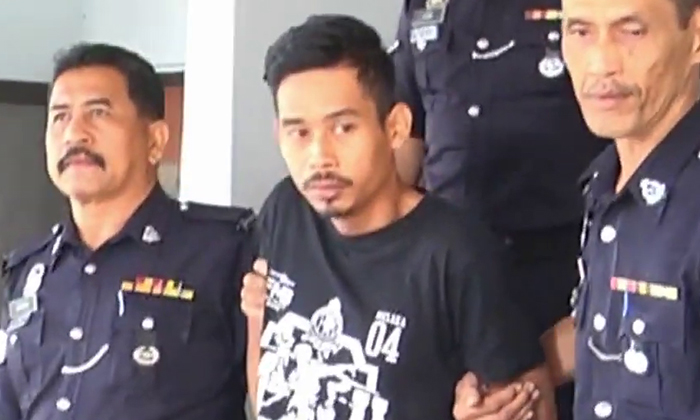 31-year-old Singaporean Shahrul Nizam Zuraimy is facing two murder charges in Melaka after he allegedly chopped his wife's head off with a parang and dismembered his 11-year-old stepson.

Stomp previously reported that a grass-cutter had found two dismembered bodies on Oct 10. The bodies were decomposed and infested with maggots.

Shahrul had apparently gotten into an argument with his wife after she complained about certain family issues.

The wife then brought up a divorce and threw a wedding anniversary present at the accused. He allegedly flew into a rage and stabbed his wife with a kitchen knife.

Shahrul then used a parang to chop her head off. He allegedly killed his 11-year-old stepson after the latter witnessed the entire incident.

Shahrul returned to Singapore on Oct 8 and apparently confessed to his father about the act during a meal. He was later arrested by the Singaporean police at his place of residence and handed over to Malaysian authorities on Friday (Oct 11).

The Star reported that no plea was recorded from Shahrul , who merely nodded when the charges were read to him in court on Thursday (Oct 24).

According to the statement of facts, the accused is said to have murdered 27-year-old Norfazera Bidin at a house in Taman Merdeka Jaya, Batu Berendam, Melaka, between 9pm and 1am on Oct 6.

He is also accused of murdering 11-year-old Muhammad Iman Ashraf Abdullah at the same location and time.

If convicted, he will face a mandatory death sentence.

No bail was granted and the court fixed Dec 16 for case remention.