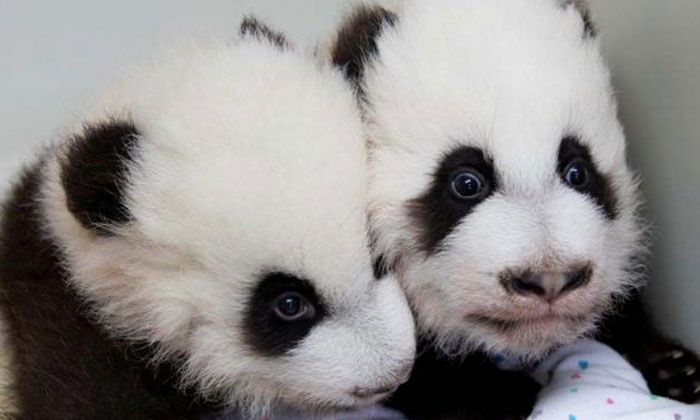 The only giant panda twins in the United States were officially named Ya Lun and Xi Lun at the cubs' 100-day naming celebration on Monday at Zoo Atlanta.

The winning names are from among seven sets supplied by conservation partners in Chengdu, in China's south-western Sichuan province.

"This is a celebration we share with the City of Atlanta, our long-time partners at the Chengdu Research Base of Giant Panda Breeding in China, and with our Zoo Atlanta family, which includes friends and fans from around the world. As we wish Ya Lun and Xi Lun well today, we celebrate the future of their species together," Mr King continued.

he 100-day celebration, which has been followed with all seven Atlanta-born giant pandas, is an ancient Chinese tradition that holds that when a child reaches the 100th day of life, he or she has survived the fragility of infancy and may be considered on track for a successful future.

Ya Lun's and Xi Lun's festivities opened with a performance by the Wesley International School Choir. The name revelation was followed by a traditional lion dance by the Chien Hong School of Kung Fu.

Born on Sept 3, 2016, the pandas are the second set of twins for Lun Lun and the sixth and seventh offspring of Lun Lun and Yang Yang.

According to Ms Rachel Davis, director of communications at Zoo Atlanta, all of the giant pandas at all four US zoos housing them are owned by China.

"As part of our loan agreement with China, all of the offspring of our adult pair, Lun Lun and Yang Yang, do eventually travel to China when they are around three years old," Ms Davis said.

"A total of five giant pandas that were born to Lun Lun at Zoo Atlanta have travelled to China thus far: Mei Lan, Xi Lan, Po, and twins Mei Lun and Mei Huan. The new twin cubs will eventually travel to China as well, although they will have a few years to grow up with us here in Atlanta before it's time for them to do that."

Due to a conservation effort in China and around the world at institutions such as Zoo Atlanta, the International Union for the Conservation of Nature (IUCN) downgraded the giant panda's status from "endangered" to "vulnerable" in September, according to the zoo.

However, the species remains heavily reliant on conservation programmes. Fewer than 1,900 giant pandas are estimated to remain in the wild in Sichuan, Shaanxi and Gansu provinces, where they face continuing threats from habitat fragmentation. Habitat loss as a result of deforestation and other human activities.

More than 1,200 of China's remaining wild giant pandas live inside nature reserves, eight of which are supported by Zoo Atlanta.

Cultural consul Xie Fei from the Chinese Consulate-General in Houston attended the ceremony and praised Zoo Atlanta for its conservation efforts:

"The zoo has over the years provided valuable support and expertise for the conservation of the giant panda and its habitats in China, which is highly appreciated by the Chinese government and people. The giant panda programme exemplifies the China-US co-operation."

The animal guests of honour were not present to meet their fans at the ceremony. The twin cubs are working on mobility. Ya Lun and Xi Lun have mastered scooting and are now working on learning to walk. They are expected to make their debut in late December or January. People who are interested can take a peek at the pair on PandaCam, hosted by Animal Planet L!VE at zooatlanta.org/pandacam.

"We're very excited to celebrate the milestone of the cubs getting their names," Ms Davis said. "Not only is this an important moment for the cubs, but it's also a celebration of the hard work of our giant panda care team in helping them thrive over the past few months. We look forward to being able to introduce them to guests."