Meet the most self-entitled pedestrian ever at Balestier Road 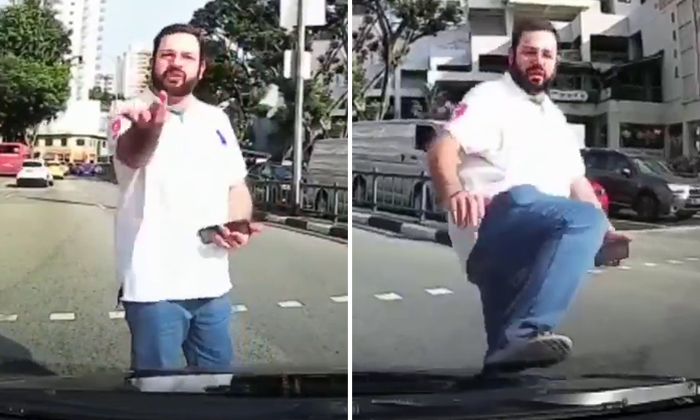 A pedestrian crossed the road despite the traffic light not being in his favour and got very cross indeed when a driver honked at him.

Facebook page SG Road Vigilante - SGRV posted a video of the incident that occurred along Balestier Road on July 18, at around 5pm.

In the video, a man can be seen crossing the road while using his handphone, despite the traffic light being red for him.

An oncoming car honked at the pedestrian, which triggered him.

The pedestrian made various angry gestures and appeared to be chiding the driver.

When the car inched forward, the pedestrian was not deterred and stepped further into its path, before continuing his tirade. He also lifted his leg in a kicking gesture.

The video, which has been viewed over 137,000 times to date, was also shared by ROADS.sg with the caption: "And the award for the most self-entitled, phone-using jaywalker goes to this guy along Balestier Road."

Related Stories
Woman learns painful lesson of how jaywalking while using your phone never ends well
Jaywalker 'appeared out of nowhere and stared at me like it was my fault', says driver
Auntie jaywalks at Eu Tong Sen Street: Who's to blame if she gets knocked down?
More About:
road rage
jaywalk
pedestrian