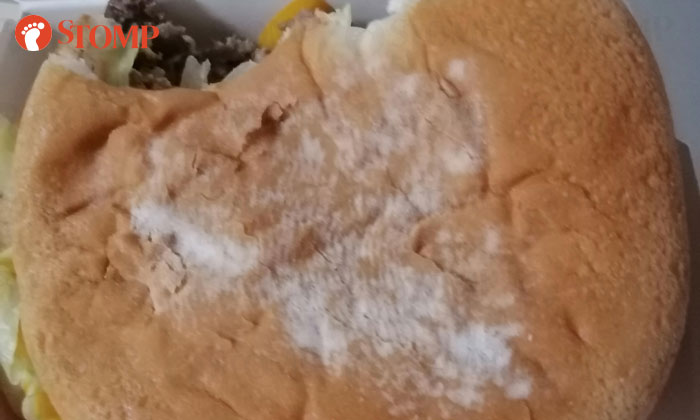 McDonald's has responded to a customer's complaint that she found what she believes to be 'white mould' on a burger she had ordered.

Stomper Wanita told Stomp she had ordered a take-out Big Mac meal at McDonald's Yishun Safra outlet on Tuesday (Feb 18) at about 8.34pm.

She only noticed the 'mould' on the burger bun after she had reached home.

"Once I arrived home, I unboxed the meal to have my dinner and saw this white mould on the back of the burger," she said.

"I was not feeling well enough to bring the burger back to the outlet to show the counter staff.

"Since I was not well, I could not make my way down to buy any other meal.

"In the end, I could only have the fries!"

In response to a Stomp query, a McDonald's spokesman said: "McDonald’s is committed to food quality and safety and the well-being of our customers is of utmost importance.

"We have since been in contact with the customer and have addressed her concerns.

"We have also reinforced safety procedures with our restaurants."